FOLLOWING what it says has been a successful pilot scheme Costcutter is rolling out its social media training programme to all its retailers in 2016. Early work and advice will concentrate on Facebook and the training programme will be available to all of Costcutter Supermarkets Group’s 2,600 retailers.
Derek Ritchie owner of the large (6,500sq ft) Costcutter in Ellon, and another in Mintlaw, was one of the retailers involved in the pilot programme and ahead of Christmas he told Scottish Grocer it had made a significant difference to his communication with customers since he began the trial early in 2015.
In particular he’s impressed by how Facebook users have engaged with the store, how his network has grown, the cost-effectiveness of using advertising and promotional techniques like boosted posts, the flexible integration between the stores’ and Costcutter head office’s pages, and the ability to be creative and use things like local competitions to attract interest and new customers.
There are a few potential difficulties to be aware of but he hasn’t faced major problems, he said.
“My Ellon store is just coming up on 1,000 Facebook likes so I’m quite pleased with that. Most of those people should now get my posts.” 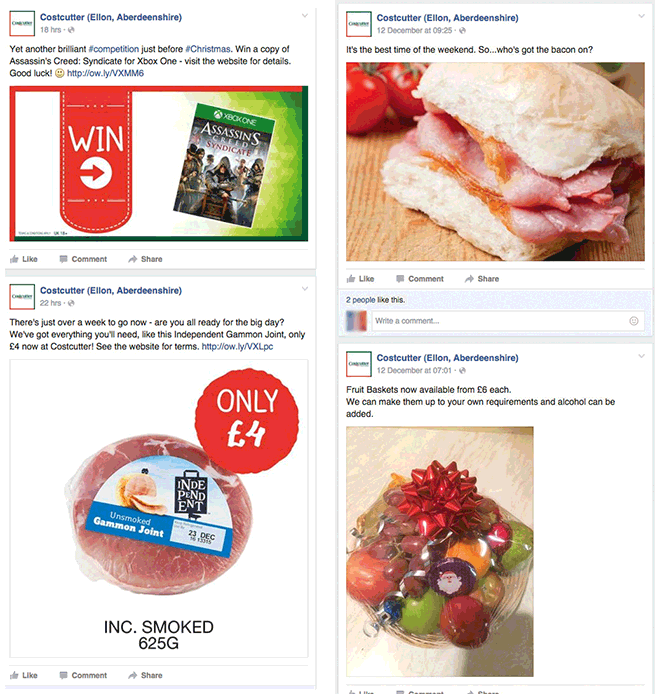 He makes the posts himself and since he began to “get Facebook” he’s been pleased by how well it can be used to highlight promotions and how quickly he can make things happen. It proved very useful as pre-Christmas activity built up, he said.
“For example, we got holly wreaths in, so I put up a display, took a photograph and posted it saying ‘Holly wreaths available now!’ That’s the kind of thing that works well for us.”
He had been concerned that using boosted posts – where commercial Facebook page owners can have messages relayed to people beyond their own networks and can define the number, locality, gender and age group of the people they want to reach – might be expensive. But he had been pleasantly surprised he said. It’s possible to experiment for prices as low as $1 and he had supported the launch of Christmas hampers with boosted posts that cost around $15.
He finds it a cost-effective alternative to local newspaper advertising, not least because Facebook provides detailed data on how many people posts reach.
“That post reached 1,300 people which I was quite pleased with. Beyond those people who had already liked the store’s Facebook page it reached 998 people and, of the 1,300, there were 237 people who clicked on it.”
One of his most successful activities saw him run a competition while he was offering Aberlour malt whisky for £19.99 a bottle. Anyone who ‘liked’ and ‘shared’ the post was put in a prize draw to win a bottle.
“The figures show me that post reached 8,002 people, for the price of one bottle. I sold out of 20 cases of Aberlour in the two shops within two or three days.”
He had been concerned that he might receive inappropriate or offensive posts and it has happened a few times. One was from someone who appeared to have a gripe with someone who had worked at one of the stores. The others may have been youngsters or others simply being inappropriate for fun or devilment.
You simply take those things down, he said. But he had been pleased that such problems had been rare.
On the other hand, if one of the shops receives genuine criticism he thinks it is better to leave that comment on the page and to provide “a nice reply”. Feedback of any sort is useful and you can show that you value customer opinions, he said.
Most of the comments, however, have been positive, which he finds pleasing. He reckons it’s very important to ‘like’ such comments quickly and better still to reply to them.
On social media generally he also has some knowledge of Twitter but he intends to concentrate on Facebook for the time being.
Back at Costcutter headquarters digital marketing manager Sean Russell said: “With two-thirds of adults in the UK owning a smartphone and 90% of 16-24 year-olds having one, a strong social media presence is key to reaching consumers who are not consuming media in the traditional way.
“Facebook is still the biggest social media platform in the UK and its business pages allow retailers to take control and add their own personality, while still benefitting from the support provided by Costcutter Supermarkets Group’s digital team.”