Giant retailers have been criticised over how they treat their suppliers. Now suppliers, trade associations and other retailers can raise issues with the Groceries Code Adjudicator. 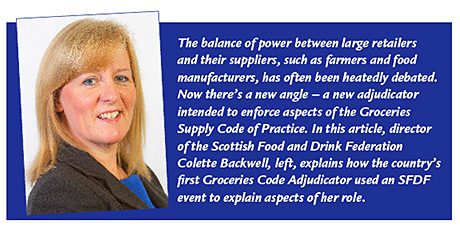 BACK in April 2008, the Competition Commission published a report following its investigation into the supply of groceries by retailers in the UK. The report concluded that the transfer of excessive risk and unexpected costs by grocery retailers to their suppliers through various supply chain practices, if left unchecked, would have an adverse effect on investment and innovation in the supply chain, and ultimately on consumers.

To remedy the adverse effect on competition, the Commission recommended the creation of a strengthened and extended Groceries Supply Code of Practice (GSCOP), and an independent body to monitor and enforce compliance with the code.
The GSCOP, which came into effect in February 2010, covers relationships between retailers and direct suppliers. Groceries as defined be the code include food, pet food, drinks, cleaning products, toiletries and household product and the GSCOP applies to retailers with an annual turnover of more than £1bn.
The Groceries Code Adjudicator Act came into force on 25 June 2013, creating the UK’s first independent adjudicator to oversee the relationship between large supermarkets and their direct suppliers. The Groceries Code Adjudicator will enforce the code by: arbitrating disputes between retailers and suppliers; investigating complaints from suppliers; naming and shaming retailers who break the rules; and imposing fines in the worst cases.
In December, the Scottish Food and Drink Federation (SFDF) hosted an industry forum with the newly appointed adjudicator, Christine Tacon, who outlined her role to an audience of producers, retailers and trade bodies.
She advised that food and drink producers can lodge anonymous complaints against the largest retailers both direct to the Groceries Code Adjudicator’s office or through trade associations.
Ms Tacon said one of her priorities is to build strong relationships with code compliance officers at the large retailers – to ensure that they fully understand her role and how she will work with them. Simultaneously Ms Tacon is collecting issues raised by suppliers and others where there are potential code breaches. It is important that suppliers tell the adjudicator of practices that give them concerns.
For the most part suppliers and retailers in Scotland enjoy positive, productive relationships. However, there are times when issues arise, with suppliers facing excessive risk and unexpected cost which in turn hampers their consumer offering.
Having campaigned for the Groceries Supply Code of Practice, the Scottish Food and Drink Federation is committed to working with the Grocery Code Adjudicator to ensure that this mechanism delivers for Scottish producers and consumers alike.