DRINKS firms are no strangers to bigging up the opportunity warmer weather provides, but does the sunshine really light up sales figures or is it all hot air?
Omar Nasir, whose growing portfolio of stores includes two Spars and a Day-Today in Motherwell – with a Bellshill store soon to join the fold – certainly thinks summer weather has a big impact on drinks sales.
“It’s massive,” said Omar. “We sell more water, we sell more slush puppies and the alcohol deliveries increase by quite a lot.”

In his Spar store, Omar said that when the sun comes out, he’ll take any water that’s on offer and move it to the promo bins at the front of store, allowing him to capitalise on the increased demand.
Looking to this summer, Omar’s got fruit flavours in mind, and he’s eyeing new products with freshness as a focus.
“I’ve seen the new Robinsons two-for-one deal £1.50 range and I was thinking about ordering that in. It looks fresh,” he said.
Fresh and fruity doesn’t just sell soft drinks in summer, it’s also a theme for alcohol sales.
Contrasting with relatively low demand in the winter months, Omar said fruit ciders are a big hit with his customers.
“Kopparberg and the mix fruits, during the winter hardly any cases shift, but during the summer it can be two or three a week,” he said.
Day-Today retailer Sak Gosal echoed Omar when he reported strong sales of fruit-flavoured ciders in his store in the North Ayrshire town of Beith. 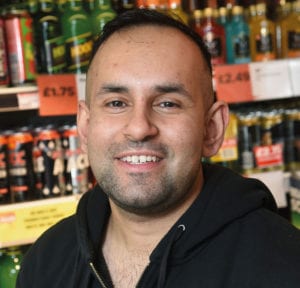 “The alcohol deliveries increase by quite a lot.
Kopparberg and the mix fruits, during the winter hardly any cases shift, but during the summer it can be two or three a week.”
– Omar Nasir
Spar Leven Street

[/box]
“You’ll see that Smirnoff has a new cider line out, cider sells.
“Strongbow Dark Fruit, that flies off the shelf when it’s warm. They’ve done well with that,” he said.
It wasn’t exactly a heat wave, but Sak said he has already seen strong warm weather sales from the hot spell enjoyed by many across Scotland at the end of May, and he reckons sunshine can benefit drinks sales across the board.
“In general drink sales do fly out, they increase phenomenally.
“That good weather we had, my drinks fridge was emptied in a couple of hours. I think drink sales increase all over, 110% people reach for the chiller.” 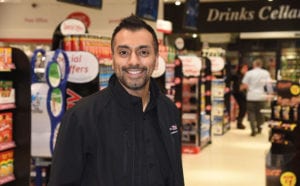 “That good weather we had, my drinks fridge was emptied in a couple of hours.
“I think drink sales increase all over, 110% people reach for the chiller.”
– Sak Gosal
Day-Today Beith

To capitalise on the hot weather, Sak also increases his facings of water and, like Omar, he’s taking a look at stocking the new fruit flavoured offer from Robinsons.
Sak also adds another element to his beer cave display that keeps customers and his local licensing standards officer satisfied.
“In our beer cave we have water in there, the licensing board love it as we’re reminding people to keep hydrated,” he said.
“We try to keep a lot of products in stock, we do buy more in the summer and we highlight new products to customers.”

Beer sales are big business for Onker Singh, whose Maxwell’s stores in both Pollokshields and Clarkston have built up a reputation through their craft range.
Onker reckons that this summer retailers could be missing a trick if they don’t stock some craft beers.
“The thing about it is, the craft ales craze doesn’t look like it’s going to stop. If anything it’s building momentum.
“Don’t get me wrong, if you’re a craft drinker you’ll have a Peroni or a Moretti at a barbecue, but if you’re buying for yourself you’ll buy two or three craft beers and enjoy them,” he said.

With the explosion in craft brewing in recent years, the category can be tough to navigate for customers and retailers alike, but Onker reckons its key to be able to offer customers recommendations – and he has some of his own for the summer.

“The Edinburgh fusion gins, they’re 20% ABV and what people are doing is using it as cordial and topping up with prosecco.
“I think that’s going to be a big hit.”
– Onker SIngh
Maxwell’s Clarkston

“If a customer comes in and says ‘I’m looking for something  crisp, easy to drink, but I want to taste it’, I’d maybe recommend an Augustiner Helles Lager.
“You’ll drink one or two of those but you’ll take your time,” he said.
Beer isn’t the only off-sales segment to sell well in the summer according to Onker, who reckons the sunshine also brings a shift in wine preferences that retailers would do well to recognise.

“What you’ve got with wine sales in particular, the obvious thing is people drinking more rosé wine.
“Wine sales are also a lot more on white wine, red wine you get with barbecues and stuff, but generally white wine goes about two to one, and that changes in winter to two red and one white.
“A classic for summer would be a New Zealand Sauvignon Blanc. You can pick up a cheap Marlbrough and you wont be disappointed,” he said.

Closer to home than New Zealand, Onker also reckons there’s a chance gin will shine this summer, and he highlighted Edinburgh Gin’s liqueur range as one to watch.
“The Edinburgh fusion gins, retailing at £19. They’re 20% ABV and what people are doing is using it as cordial and topping up with Prosecco.
“I think that’s going to be a big hit,” he said.