DIAGEO is rolling out a new £1.5m marketing campaign for Bell’s whisky in the run up to the festive season.

On screens now and featuring comedian Matt Berry, the two new TV adverts offer a tongue-in-cheek take on early Christmas adverts, and they’re backed up by out-of-home and digital activity. 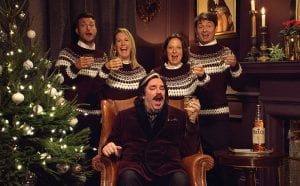 “Bell’s already has significant stand out on shelf, and with this ATL driving excitement and mass awareness in the run up to Christmas, it is a must stock for retailers looking to capitalise on its sales opportunity.”

• Following on from the Famous Grouse’s ‘Perfectly Balanced’ TV ad  in October, Maxxium has launched a second ad in time for Christmas.

Johna Penman, marketing controller for The Famous Grouse, said: “We are determined to come out on top and win this Christmas. We’re confident this new campaign will deliver.”