As the Isle of Arran Distillery approaches its 21st year, it is celebrating the whisky-making heritage of its island home with the first release in its Smugglers’ Series. 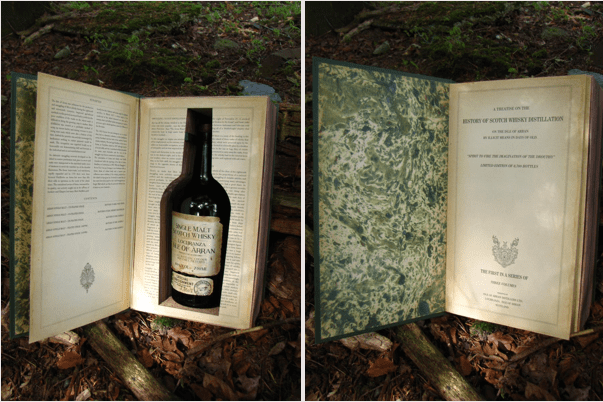 The Smugglers Series honours the tradition of the illicit whisky trade that operated from Arran and up the Clyde to Glasgow. Each new release will be ‘smuggled’ in unique packaging reminiscent of the hiding places used in the 18th and 19th centuries. Smugglers’ Series Vol. 1 ‘The Illicit Stills’ features hidden packaging that mimics a hardbound book, complete with a cut-out compartment that conceals the bottle.

Euan Mitchell, managing direct of Isle of Arran Distillery said: “We’re justifiably proud of the whisky-making heritage of the island. Visitors have long been fascinated in the illicit industry that ran between Arran and Glasgow in centuries past.

“With the distillery turning 21, it felt like the perfect time to commemorate that exciting time in Scotch whisky’s heritage with a series that pays homage to its ancestors whilst looking forward to the distillery’s future.”

Described as an Arran dram of true unbridled character, reminiscent of the trade which gave rise to the illustrious reputation of ‘the Arran water’, ‘The Illicit Stills’ is a limited edition with only 8,700 bottles released worldwide, bottled at 56.4.% ABV with an RSP of £84.99.