CHRISTMAS is unquestionably one of the most important times of the year for the confectionery market.

And for convenience retailers, making the most of the season requires careful thought about what customers want and what products to stock on the shelves.
The UK’s biggest confectionery companies aren’t short of suggestions.
Mondelez International, which says it is category leader, according to Nielsen figures, with brands accounting for 32% of the market over the season, has developed a strategy designed to build excitement ahead of Christmas with festive treats and to extend sales into the New Year with sharing products.
Among the novelty items designed to highlight the Christmas season in stores are the Cadbury Dairy Milk Mousse Snowman Vanilla, returning this year along with a new variant – Cadbury Dairy Milk Mousse Snowman Chocolate. The snowmen have a vanilla or chocolate mousse filling encased in Cadbury Dairy Milk chocolate.
Also back for 2014 is Cadbury Dairy Milk Winter Wonderland and Cadbury Dairy Milk Freddo Popping Candy.
The Malteser Giant Cracker is Mars’ main NPD of the season, while the Merryteaser Reindeer is aiming to repeat what the firm says was last year’s major success.
Also returning but in a new pack is Galaxy Gift for You White, the only Galaxy white chocolate single-serve treat on the market.
“From new products, such as the Maltesers Giant Cracker, to festive POS materials, our on-the-ground sales reps are committed to helping our customers get the most out of a rise in sales over the Christmas period,” said Tony Lorman, retail excellence director for Mars Chocolate UK.
“This year, Merryteaser Reindeer POS materials will be available to all retailers, adding to the festive in-store theatre to entice new customers. They will enable retailers to maximise sales by creating a second sales opportunity, and can be placed with complementary products or by the till point.”
Nestlé quotes figures from Kantar World Panel which show that in 2013, 3m extra shoppers bought into seasonal impulse, resulting in 20% value growth for the category. Shoppers also bought more packs, more frequently and spent more money.
The same research suggests that within the convenience channel, seasonal impulse is performing ahead of the total market with sales up 31%, and accounting for 6% of total convenience Christmas sales. New products are driving the growth and appear critical to the success of the segment.
In 2013 they generated £12m sales, accounting for a huge 66% of total seasonal impulse sales.
Nestlé says the number one focus for convenience retailers in Christmas 2014 should be seasonal impulse and it is crucial to have products that appeal to a broad range of consumers.
This year, the company hopes to tempt adults with Quality Street My Orange Bar. The new bar consists of four Orange Crunch Pieces and has an RRP of 65p.
For mums looking for a treat for the children, Nestlé will offer Smarties Little Choc Penguin and the Milkybar Polar Bear Cub. Both have an RRP of 65p. 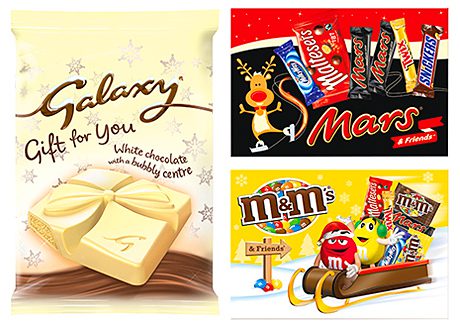 In the novelty Quality Street gift range, Purple Ones and Totally Toffee Fingers will be joined by the new Simply Fabulous Fudges. All retail at £6.00.
Advent calendars are another way to build excitement ahead of the big day and are usually purchased well in advance.
Research from Nielsen is said to show Cadbury Dairy Milk Advent Calendars to be the UK’s number one, and this year 90g and 170g versions are available in a range of designs.
Mars Chocolate is introducing the Merryteaser Reindeer advent calendar for Christmas 2014, aiming to build on the popularity of the Merryteaser Reindeer and match the success of the Maltesers advent calendar, which the firm says saw 25% year-on-year growth in 2013.
After building excitement through the preceding weeks, the final few days before Christmas and the holiday period itself is a time for families, when demand for gifting and sharing products reaches its height, say the confectionery firms.
Mondelez says 86% of Christmas chocolate is bought as a gift or to share, with some 44% purchased for Christmas Day itself – meaning there is a huge opportunity for retailers
to boost sales outside the big day.
The company has new designs for all its tubs and cartons, including Roses and Cadbury Heroes (which for the first time is set to include Mini Wispas).
Toblerone is said by the firm to be the number one block chocolate gift line at Christmas, worth £5.5 million, according to Nielsen. 2014 sees a new, limited-edition festive sleeve and the introduction of a brand new pack. The new 60g product is a thinner triangle, making it easier to bite into and easier to share. And it’s designed to be small-store friendly with a 1 x 12 clip strip available.

The Terry’s Chocolate Orange range is being widened in 2014 with a new limited edition, Milk Toffee Crunch.
Terry’s Chocolate Orange Minis sharing bags will also return with a new variant – Terry’s Orange Exploding Candy Minis.
Mars is encouraging retailers to make sure they stock plenty of the big names like Celebrations and Maltesers, while Nestlé recommends stocking its sharing products, such as Quality Street Tub (RRP £8.05) and 1.3kg tin (RRP £8.99), early to capitalise on other events and occasions like Halloween and Bonfire Night.
Other options in the Quality Street range include the 350g gift carton (RRP £4.38), eight-sweet mini carton (RRP £1), Fruit Cremes (RRP £4.38) and – new and exclusive for the convenience channel – the Quality Street 200g carton (RRP £2.00).
Another new line from Nestlé – and an alternative to chocolate – is the Rowntree’s Sharing Tub, filled with a combination of Pastilles, Jelly Tots and Randoms.
The Trio format from Mondelez International returns this year, with Bassetts Trio, Maynards
Trio and Maynards Party Trio all back with new designs. New to the range will be Bassetts Liquorice Allsorts.
Bassetts Liquorice Allsorts will also be available in a tub for the first time, joining Maynards Sports Mix, Bassetts Jelly Babies, Maynards Wine Gums and Cadbury Eclairs.
Mondelez is also launching Bassetts 750g jars fronted by two established confectionery characters – Bertie Bassett and Bubbles, the yellow Jelly Baby (RRP £3.99).
Selection boxes, hollow figures and tubes are designed to provide good festive stocking fillers. There’s a broad variety on offer and the firms say they give retailers a chance to help shoppers make Christmas morning a little more exciting.
There’s an additional line this year in the Cadbury stocking selection box from Mondelez International, which now includes Cadbury Dairy Milk Marvellous Creations Jelly Popping Candy.
Among Mars Chocolate’s returning selection boxes are Maltesers, M&M’s, Mars and Galaxy.
However, Mondelez, quoting figures from Nielsen, says boxed chocolate is still one of the biggest segments at Christmas, worth £219m, and last year contributed most to seasonal category value growth.
Its own Cadbury Milk Tray is available in different packs and sizes to suit demand for token, special or thoughtful gifts, while Terry’s All Gold has a new design for 2014.
According to Nestlé, boxed chocolates are the most given confectionery gift, with one in three of all confectionery gifts being boxed chocolates selections.
This year, in addition to its Dairy Box Deluxe Collection (RRP £6), the company will introduce a Dairy Box mini pack (RRP £1.49) containing five chocolates, to provide a token gift option.
For the first time since 2008 the firm’s dark chocolate selection Black Magic will have a new design and a new assortment of chocolates, with the addition of a solid chocolate piece, a coffee chocolate and a truffle.