SOME of the biggest names in frozen food have had cause for celebration this summer, at the Frozen Food Awards 2022.

Held live for the first time since 2019, the British Frozen Food Federation event recognises innovation and creativity in the frozen category.

Aldi was the biggest winner on the night, collecting five Gold Awards, including the prize for Retail Product of the Year, which was awarded to its Specially Selected 4 Cheese & Onion Quarter Pounders.

The discounter was followed closely by Iceland, which won two Gold and three Silver Awards. M&S also performed well, securing a Gold Award for its Plant Kitchen No Chicken Gyoza, as well as collecting Silver and Bronze gongs in other categories.

Richard Harrow, BFFF chief executive, said: “I am incredibly proud of the hard work and creativity demonstrated by all the entrants and the BFFF team.

“The impressive innovation happening across frozen is incredibly encouraging, especially considering the important role the sector has to play as we look towards a future of increased value for the consumer and decreased waste for us all.

“We were also delighted to see M&S enter our awards for the first time in many years.”
A full list of winners can be found via the BFFF’s website. 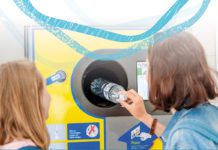 A consumer’s view of DRS