Nearly 100 years after his grandad opened a small cafe in Hamilton, David Equi has helped Equi’s Ice Cream become one of Scotland’s fastest-growing firms. We asked him how.

HE might be the man at the top of highly successful Equi’s Ice Cream, but David Equi admits that he never actually planned to go into his family business.

After moving to Edinburgh for university, his friends began “doing different things” and David saw himself moving away from his Hamilton-based family firm.

But when he returned home from his studies he agreed to work in Equi’s for a year – and still remains there more than two decades later.

“When I got here I really enjoyed it, because I like experimenting and it gave me the time to do that. Making ice cream is my true passion: bringing in new things, innovating.”

Upon meeting David, that passion is abundantly clear. Arriving at the Equi’s office in Hamilton, he immediately produced samples of a flavouring extract he was using for his latest ice cream experiment.

And despite having more than 50 flavours in their portfolio, David and his team are continually innovating and thinking up ways to make ice cream better.

“Every year we add about half a dozen new permanent lines and we spend all winter working on them, to come up with the right one. For our passion fruit sorbet, I tried about ten versions of that before we got it right,” he said.

Innovation has been the hallmark of David’s time in charge of the business. Under his Equi’s has transformed from a restaurant-based business to a major national supplier.

Equi’s began life as a small café in Hamilton, which was opened by David’s grandfather and then expanded further by his father Robert.

But it was when David took over that he pushed the business outside its Lanarkshire routes, establishing wholesale relationships all over Scotland.

“My friend used to say to me: ‘You’re the best-known ice cream brand within a mile of Peacock Cross [where Equi’s restaurant calls home], and outside of that no one knows who you are.’

“I used to get mad when I would go into Glasgow and people would say they’d never heard of us. So it has been a big mission for me to be more well known, and to expand.”

This expansion has focused on the wholesale arm of Equi’s, which David said has gone “completely mental” in recent years.

“I was left with the business when I was about 29. I refurbished the café and I built a production unit for out the back, to make ice cream in.

“I started to dabble in wholesale, in making ice cream for other people. It started really small and then all of a sudden you are doing a million litres a year. It’s gone from a spin-off from the café, to being by far the biggest part of the business.”

His hard work reaped results last year, when Equi’s secured a major contract with the Co-op to supply more than 270 of its stores across Scotland.

“We used to never be able to get into wholesalers. I tried for years and years and now all of a sudden they are banging on the door because they have seen us the Co-op.”

This substantial growth in  Scotland has encouraged David to look towards markets further afield: with plans in place for at least 3% of Equi’s sales to be international by 2021.

But while international growth could be on the horizon, David is unequivocal that Scotland will always remain at the heart of the Equi’s brand.

With provenance becoming increasingly important, he is keen to emphasise that Equi’s still uses fresh local milk and cream – which he absolutely “wouldn’t compromise on.”

“We are trying to be as professional as we can without losing our artisan background, that’s really important to us. There are always people who undercut you in ice cream, but we won’t do a race to the bottom.”

The value of local produce is something that hasn’t been lost on c-store retailers, who are increasingly starting to stock a wider range of Scottish brands. 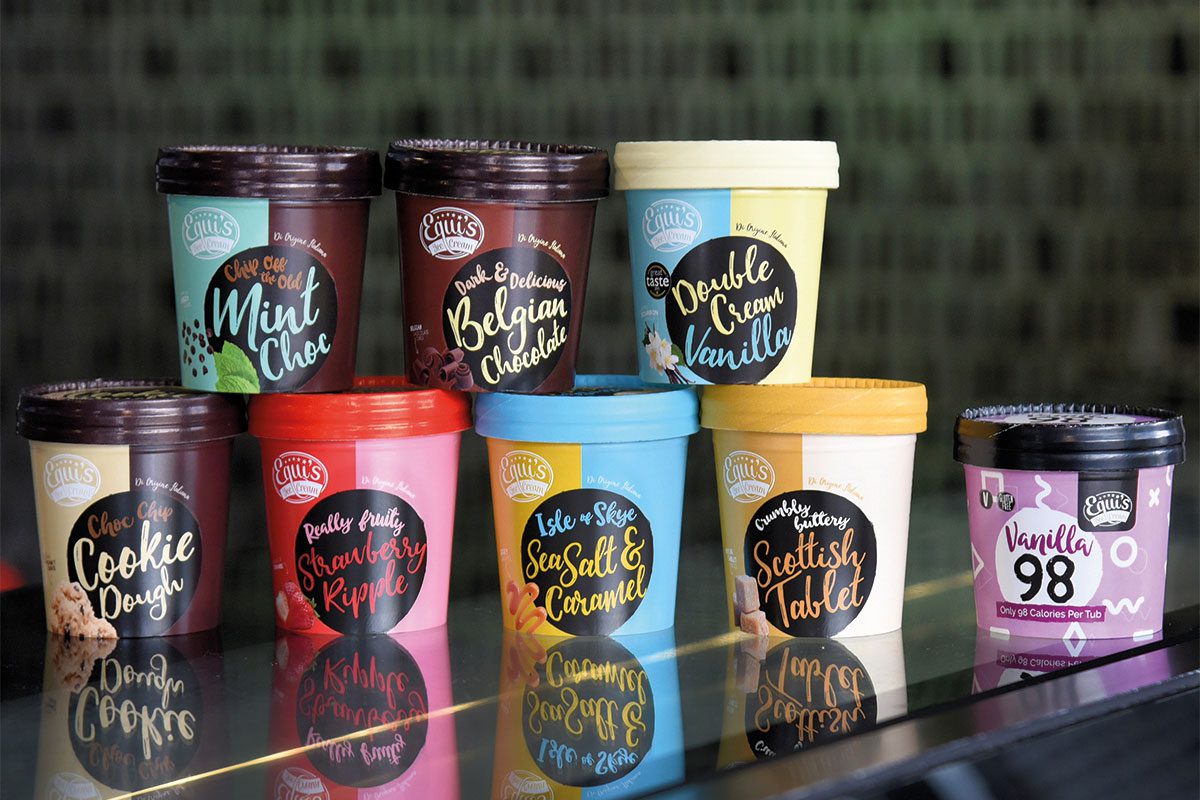 David hopes to tap into this demand with his line of convenience-friendly Equi’s tubs.

“Our biggest growth by far is in convenience. A well as the Co-op we do a lot of independent retailers, Nisa and so on, and that’s where a lot of the growth is. Convenience is something we are looking to do more of.”

One of the most popular varieties in Equi’s mini tubs has been Vanilla 98.

At 98 calories per 100ml tub, Vanilla 98 joins a raft of lower calorie ice cream products that have rushed the market following the release of the low-calorie Halo Top range.

But, according to David, these healthier alternatives won’t replace the somewhat guilty pleasure that people seek from traditional ice cream.

“I think it is about giving people a choice. Vanilla 98 is reduced calorie, but it is still made with fresh milk and double cream and sugar. There’s no artificial sweeteners in it, I think you can taste them a mile away.

“Ice cream generally is an indulgence thing, so we wouldn’t compromise on using fresh milk and fresh cream,” he said.

As well as adopting to demand for healthier options, David said Equi’s also has plans to thrown itself into free from with the release of its very own vegan flavour: “You see trends in the market like vegan stuff, we’ve been trying for ages to perfect that, and ours is actually nice.

“Although it is only a tiny percentage I think it will grow and grow. It’s quite hard to tell that our vegan ice cream is vegan.”

Launching soon in a convenience format, Equi’s vegan ice cream will also tap into environmental concerns: coming in 100% biodegradable tubs that contain a wooden spoon, rather than the traditional plastic.

All this experimentation is inspired by keeping one eye on the competition. Although Equi’s products adorn the shelves in his office, David also keeps a collection of tubs from all his biggest competitors, which he regularly tastes with his staff.

“Every week we sit and try different ice creams and ask people’s opinion. We blind taste our competitors ice cream and test them against our own. I don’t sell anything that I don’t like.”

But what flavour does David like best? For a man that spends so much time on experimenting, his answer is surprisingly conventional: Double Cream Vanilla.

“That’s boring” he laughs, “but  I think you can tell a decent ice cream by the quality of the vanilla.”

Looking to the future, Equi’s  might eventually pass from third generation to fourth. David  would like to see his daughter Alex – currently studying business at university – come into the business at some point.

But does that mean David has any plans to slow down?