With a food-to-go operation that features a pizza oven all the way from Italy, the latest venture from Giacopazzi’s aims to bring a taste of Italian life to Kinross.

GIACOPAZZI’S is a well-known name in Perthshire and across Scotland’s convenience retailing community.

Established as an ice-cream parlour in 1910, the business in Milnathort  is now a Nisa store owned and run by the founder’s great-granddaughter Joanna Casonata.

Giacopazzi’s still has a great reputation for ice cream and, with the opening of their new store, Joanna and her husband Franck are aiming to develop an equally good name for pizza.

Situated on the outskirts of Kinross, just a mile from the Milnathort store, the latest Giacopazzi’s opened for business in August. The site had previously been the local health centre but sat empty for a couple of years. With a high school, nursery and swimming pool nearby, along with a housing estate (and plans in place to build several hundred new homes) it struck the owners as the ideal location for their new development.

The 3,000 sq ft store has a spacious layout and offers a good range of chilled and frozen food, soft drinks, alcohol, grocery and confectionery. However, food to go is where it really shines. And star of the show is its range of hand-made pizzas, baked to order … in ovens shipped all the way from Italy.

“When you’ve got 350 people coming through the door in the space of 40 minutes, it can be quite tough to get everyone served”

“People are always going to want quality, so it was important for us that we could offer the best product we could,” said store manager Daniel Brown.

“We import the flour from Italy and make all the dough from scratch. Right now we’re focusing on traditional stone-baked thin crust pizzas, but going forward we can use that dough to make different styles of pizza and breads like focaccia.”

Daniel, Franck and Joanna’s father Joseph Giacopazzi even travelled to the historic city of Mantua in Italy, to be schooled in the art of making and serving pizzas.

“The key is the quality of the ingredients – the flour as well as the toppings,” said Daniel. “But I think it’s also important to spend time with the staff and ensure they know how to do everything properly. We spent a lot of time thoroughly interviewing staff and individually training them all up to get them up to the standard we were after. It’s second nature to them now.” 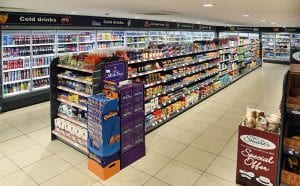 As well as pizza, the store’s fresh food-to-go section features a coffee machine, locally-supplied pies, cakes and pastries, an ice-cream counter and a chiller filled with freshly-made sandwiches, wraps and salads.

“Keeping up the volumes has been a task,” said Daniel. “We produce sandwiches here to go to both stores. Before we opened, Milnathort was selling about 25 to 30 sandwiches a day. Now we’re selling up to 300 between the two. That gives you some idea.

“We make our own ice cream, which we’re quite famous for, so it was quite important to offer that here as well. We weren’t sure how that would affect Milnathort, if there’d be a sales impact, but we’ve increased volumes at both quite considerably.

“Then there are the pizzas, which have been hugely popular. Our first weekend we thought we’d made three days’ worth of dough, based on what they were telling us in Italy. But we sold out by 8pm on the first day and realised we had a much bigger task ahead of us than we’d thought. And the volumes we were doing at the start have maintained. Last Friday night we sold about £900 worth of pizzas. It’s not exactly small numbers.” 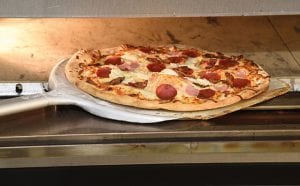 Key to the success of the store’s food-to-go operation have been the young customers from Kinross High School across the road.

“The school has actually posed the biggest challenge in terms of volume,” said Daniel. “When you’ve got 350 people coming through the door in the space of 40 minutes, it can be quite tough to get everyone served.

“We have about six or seven staff in the store at that time and four tills open. The juice section is completely cleared out by the time they’re finished. The crisps are all cleared out.

“Organisation is important. We try to prepare as much as we can. We’ll cook off a lot of pizzas and have them pre-bagged so they can just grab them off the shelf. We’ve found that quite effective. 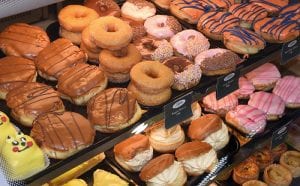 “We were concerned about how we were going to manage with so many people coming in. We thought we would have to have them queuing outside, but it is all running quite smoothly, they’re all in and out in a few minutes.”

And while school kids might be expected to be big spenders on pizzas, pies and donuts, Daniel said he had been surprised by the popularity of healthier options.

“We have a lot of health drinks, salads and healthy snacks, which the school kids are buying a lot of, especially the girls. 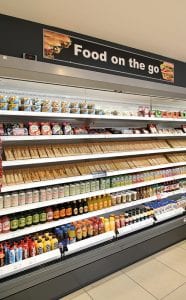 ”It’s been quite interesting. We weren’t sure what they were going to be buying, if it would just be pies and sausage rolls, but they’re actually opting for a lot of healthier options. I wouldn’t have expected such an uptake, but I’m trying to make more room for it now.

“With the school and nursery so close, healthy food has to be a focus for us,” he said. “But I think if all you’re doing is putting a couple of wrinkly apples and bananas at the front of the till, it won’t sell. You’ve got to bring in products that are more interesting to customers. Things like protein balls or lentil crisps – they’re actually really good.

“I like to push products that differentiate us from the competition. We’ve got a lot of protein-rich snacks and drinks which are very popular at the moment, especially with schoolgirls, fruit and nut packs from Bramik Foods, coconut chips. It is a case of having more variety and interesting products.

“Their success has been a bit of a surprise, but a nice one, because if we can be seen to be a successful healthy retailer that’s a really positive thing. It will be a much bigger focus for us going forward.”