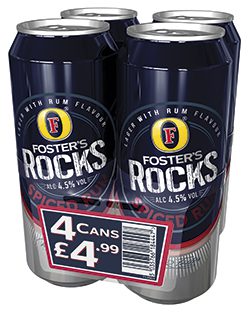 IN the lead up and throughout the Christmas period, shoppers often look for items to create a special at-home occasion and are more likely to spend a little bit more than usual either by trading up or by adding extra items to their shopping basket, reckons Craig Clarkson, category and trade marketing director – off-trade at beer and cider giant, Heineken UK.
“Last year ‘total alcohol’ was the joint number-one performing category over the Christmas period, up £66.6m, demonstrating that the festive season offers retailers the opportunity to maximise alcohol sales,” he said.
“It’s also a good time for encouraging shoppers to trade up to more premium brands, considering that 74% of cider and beer growth, during the build-up to Christmas last year, came from premium and world beer brands, such as Desperados and Heineken.
“During the festive season, while shoppers do stock-up with larger packs for parties, the trend last year was top-up missions, something that has continued throughout 2015, growing by 40%.
“In fact 80% of cider and beer sales in convenience last Christmas came from smaller packs (such as single bottles, twos, threes or drinks in four-packs), when consumers were topping up on the way home or en-route to visit friends.
“Consumers are always looking to try new varieties and flavours and with a wealth of NPD launched in 2015, retailers can offer their customers new beer products including Desperados Red and Foster’s Rocks; a new golden ale from John Smith’s; and new cider variants such as Bulmer’s Zesty Blood Orange, Old Mout Strawberry & Pomegranate and Strongbow Cloudy Apple,” he said.
However, retailers should be aware, he stressed, that over the 12 weeks of Christmas 2014 in the UK the top 10 beer brands made up 62% of total cider and beer category sales. On a UK basis he identified those as Stella Artois, Foster’s, Carlsberg, Carling, Strongbow, Budweiser, Frosty Jacks, Kronenbourg 1664, Guinness, and Heineken. But of course in Scotland Tennent’s Lager is the biggest beer brand and MGD, Peroni and Corona are also significant players.
Clarkson’s Christmas strategy for retailers includes:

• Stock a range of mainstream brands, premium packaged cider and beer such and a selection of new varieties.

• Keep products in a chiller as it’s essential to drive sales and impulse purchases. It’s also important to separate cider and beer in the chiller to make it easier for shoppers to find the products they want.

• Realise that availability is the most important thing during the Christmas period as sales of cider and beer increase during the season. Poor brand choice is one of the top three deterrents to purchasing beer and cider in convenience outlets and over one third of shoppers will go elsewhere if the right product is not available – so make sure you give the fast selling brands enough shelf space.