Retailers in Glasgow and across the Central Belt need to prepare for the impact that congestion, road closures and parking restrictions might have during the Commonwealth Games. Grant Keogh, Menzies Distribution’s ‘games planner’ for the London Olympics, explains how the firm is preparing for Glasgow and offers advice to retailers. 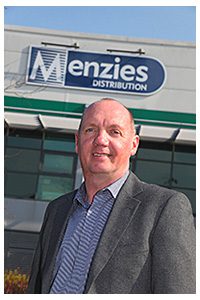 IT’S all about preparation when it comes to the Games, as we know first-hand from our experience at the London Olympics. We are putting the lessons we learned then into practice now, as we aim to manage the delivery of products on time to retailers during Glasgow’s forthcoming sporting spectacular.

In 2012, the first step was to carry out extensive research to help us prepare a robust contingency plan.
This included careful analysis of the Games Route Network to identify affected retailers, working with publishers to negotiate earlier delivery times on these routes, the introduction of extra vehicles, on-going monitoring of traffic congestion, as well as regular analyses of sales data to ensure that retailers were able to respond to any increase in demand for magazines and newspapers from customers.
Obviously there was a lot of speculation before the Olympics began about traffic disruption and potential delays in deliveries. With a time-critical delivery service such as ours we can’t afford delays. However, our preparation definitely paid off, and we were really pleased to record a 100% on-time delivery rate for our London news retailers.
With everything that we learned during the London Olympics, from our involvement with various agencies like the Freight Transport Association, and localised organisations such as Transport for London and the games organising committee (LOCOG), we now have a better understanding of inter-agency working. We hope that this experience, combined with our extensive preparations, will allow us to deliver on time during the Commonwealth Games – and support our retail customers throughout.
The specific routes affected as a result of the Games are yet to be confirmed; however, the influx of around 6,500 athletes, 1,500 representatives of the wider Commonwealth Games Family, 6,000 journalists and over 1m spectators will no doubt have an influence on businesses, not just on the route network but across the city.
One of the major areas affected will be Glasgow’s East End, which will house the Commonwealth Games Village, the new Sir Chris Hoy Velodrome, Emirates Arena, Glasgow Green and Celtic Park.
To the west of the city, visitors will be travelling to venues including the SECC, Kelvingrove Lawn Bowls Centre and the Scotstoun Sports Campus.
This is, of course, great news in terms of passing trade. If retailers are prepared, they have a great opportunity to secure additional revenue from visitors to the Games.
Conversely, traffic delays and congestion are likely to result, not just in Glasgow but in Edinburgh and Carnoustie on the days that swimming and shooting events take place.
Such an increase in footfall, in conjunction with no parking availability at venues and an additional 1,100 Games vehicles on the road network, is likely to cause some issues for retailers. Businesses should start considering how late deliveries of stock might impact upon their business and have a back-up plan during the Games.
While some problems may be beyond their control, late deliveries are something that logistics and delivery companies like ours are working hard to avoid.
Our preparation replicates all the most successful elements of the work that took place in London, and includes the introduction of a special Commonwealth ‘nerve centre’ in Menzies Distribution’s Linwood offices, just outside of the city.
From this central location, my team and I map out venues, event days and restrictions, as well as routes and businesses affected as information is released from organisers.
A discussion with Scotland’s publishers about delivery times and the potential to arrange earlier deliveries is also on the cards, and is something that proved successful in London. Ensuring all drivers hold suitable photo ID and documentation to allow quicker access through checkpoints also helps to keep deliveries moving.
While we have learned much from experiences during the Olympics, we have identified that there may well be more of an impact on congestion during the Commonwealth Games in Glasgow. In London, activity was spread across a very large city, while in Glasgow a great majority of events are taking place in a relatively small area between the East End and the SECC.
We are well-prepared and working hard to ensure that delays are minimal. We will be keeping all of our retailers up to date to ensure that where we identify issues, we communicate these to the businesses that are relying on us.