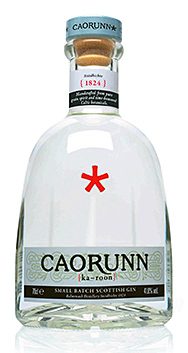 The expansion in the off-trade will also see Caorunn Gin increase its listings in Waitrose stores – bringing distribution numbers to 102 stores across the UK, including Scotland, from the middle of this month.
Infused with five ‘Celtic’ botanicals – Rowan Berry, Coul Blush Apple, Heather, Bog Myrtle and Dandelion Leaf – Caorunn Gin is the only gin handcrafted at a working malt whisky distillery on Speyside. Using an antique Copper Berry Chamber, its production features pure grain and Scottish water.
The new listings will nearly triple Caorunn Gin’s off-trade distribution to over 200 supermarkets.
Caorunn Gin brand manager Ibolya Bakos-Tonner said: “We are very excited about the new Tesco listing, as well as expanding our distribution in Waitrose.”

Image – Caorunn, the Speyside- made gin often served with apple, is now in 88 Tesco stores in Scotland.