SHOPPERS tend to stock up on milk as part of their regular supermarket shop, which cuts down on the need to buy it as part of a top-up c-store visit.
So to attract milk shoppers, convenience retailers have to look at different ways to “add value” to milk lines.

Dairy giant Arla, the company behind the Cravendale milk brand, reckons shoppers want milk that has “differentiated benefits”, for example milk that’s made to stay fresher for longer, like its Cravendale brand.
Consumers also want milk to be produced as locally as possible, as they want it to be fresh, and want to support their local area.
In the milk fixture, milk should be organised by fat type and there should be sufficient space allocated to whole, semi-skimmed and skimmed, it says.
Linksaves which partner milk with other products like cereal and bread can work well too, it argues.
Arla introduced a one-litre Cravendale PET bottle last year, RRP £1.05, and also recently entered the food-to-go category with a 500ml PET bottle, RRP 75p.

The retail value of fresh milk fell from £2.92bn in 2009 to £2.69bn in 2012, according to Müller Wiseman.
And it argues, that to compete with the multiples, convenience retailers have to cover all the bases and make sure they provide customers with a “relevant and compelling dairy offer, catering for those who view dairy products as daily essentials, those on a top-up mission, and those looking for a tasty on-the-go treat”.
Retailers should make sure the milk chiller is kept at a temperature below five degrees. The fixture should be reviewed hourly and stock should be rotated to minimise waste.
It’s also a good idea to have milk visible from the door, and to keep bestsellers at eye level, it says.
The Müller Wiseman milk range includes Black and White and six regional labels – Grampian, Milk from Scotland, West Country, Cornish, Milk from Wales, and milk from its Northern Dairy.

Consumers are now keen to choose from a wider range of milk products, according to Graham’s the Family Dairy.
The firm reckons that consumers’ willingness to broaden their outlook has helped it increase sales of its conventional, organic and Jersey milk products. Most growth has come in its premium Gold Jersey and “price-fighting” Light and Low ranges, it says. The Graham’s brand is said to be growing 35% in volume year on year. 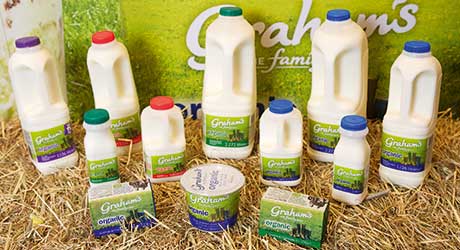 Retailers should keep flavoured milk drinks, like Yazoo, in the chiller, according to Helen Cridge, trade marketing manager at FrieslandCampina.
At the end of 2012, the firm launched the £1.5m Good for You marketing campaign.
Quoting IRI data to 5 January 2013, Cridge said Yazoo increased 7% by volume year on year – ahead of the flavoured milk drinks market overall, which is expected to grow 6% by volume in 2013.