THE cream of the convenience crop put their best foot forward at the Hilton Hotel in Glasgow last month for the biggest night of celebration on the industry’s calendar – the Scottish Grocer Awards 2019.

And what a night it was. Retailers, category sponsors and key industry figures were on top form as Scottish Grocer recognised those who have gone above and beyond in pursuit of excellence over the last 12 months.

With 20 gongs up for grabs on the night, there were plenty of reasons for celebration, as Scotland’s most innovative and hard working retailers received the recognition they deserve.

The Scottish Grocer Awards 2019 also coincided with a major changing of the guard for the industry, with former SGF chief executive John Drummond stepping down from his position in the Healthy Living Programme.

Well known and highly regarded across Scotland’s retail sector, John is a former winner of the Scottish Grocer Awards’ top honour – the Industry Achievement Award – and he was recognised again as proceedings got underway at this year’s ceremony.

In his opening remarks, Scottish Grocer editor Matthew Lynas commended John for the exceptional effort he has put into educating a generation of youngsters on the benefits of healthy living, as well as his unwavering support for Scottish retailers.

John was presented with a retirement gift on behalf of the whole team at Scottish Grocer in recognition of his outstanding contribution to the industry.

With one captain of the industry already honoured, and a ballroom well fed, it was time for this year’s Scottish Grocer Awards host, Alexander Armstrong, to take to the stage and reveal the winners.

Fresh from a trek up Mount Kilimanjaro in aid of Comic Relief, Armstrong entertained guests with all the skill of a professional raconteur, before turning attention to the evening’s awards.

• The night opened with two bakery awards. First up was the award for bakery in a managed store, which provided Scotmid with an early win as its Clarkston store topped the category.

• Next up, the hotly contested Innovation Award. Judges were on the hunt for a store that had shown real imagination to improve the service offered to customers.

• The category of the moment in convenience – food to go – attracted plenty of entrants but in the end there could be only one winner.

Competition for this year’s Food To Go Award was tight, but Scotmid Co-op Ratho was the winner on the night.

• An eye for detail was critical to success in the next category on the night, the Merchandising Award. Finalists in this category hailed from opposite coasts, but it was the west that won it on the night with Ardeer Services in Stevenston taking the top spot.

• Always a popular category in Scotland, confectionery can be integral to a convenience store’s offer. Judges for the Confectionery Retailer of the Year Award were on the hunt for eye-catching displays, secondary sitings and a well-tailored range. KeyStore Cults in Aberdeen hit the sweet spot this year, with judges commending the store’s great selection and engagement with seasonal lines. 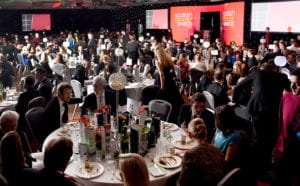 • From chocolate to fizz, attention turned to the Best Soft Drinks Outlet of the Year award. While all three finalists impressed Scottish Grocer Awards judges, this year’s prize went to Clydebank Co-op Keystore Kilbowie. The store’s competitive yet tailored range, as well as key product placement, were commended by judges.

• Another headline grabbing category in Scottish convenience, finalists for the Chilled Retailer of the Year Award all demonstrated a great understanding of the value that a quality chilled offer can provide.

• While politicians at Holyrood have continued to ponder what tweaks to rules on promotions will save the nation, Scottish retailers have been rolling up their sleeves and doing work on the ground to improve dietary habits in their communities.

The Health Promoting Retailer of the Year award saw Scottish Grocer Awards judges catch up with stores doing commendable work across the country. This year the top prize was snared by Doonfoot Day-Today, thanks to its clever use of promotions, signage and links with the local school.

• Yet another category celebrating stores which serve as pillars of their communities, the Post Office Retailer of the Year award recognised those c-stores providing an invaluable asset to shoppers.

Whittling down a competitive field to crown one store the winner was a tough task for Scottish Grocer judges, but  Best-One @ Brownlies, Biggar, nabbed the prize thanks to its exceptional levels of community involvement – particularly for an incredibly busy Post Office site.

• New for 2019, the Innovation in Impulse Award recognised retailers who have demonstrated original thinking and retailing excellence in their store. Judges were on the hunt for outstanding ranging, merchandising and clever solutions.

McLeish, Inverurie, was crowned inaugural winner of the award, with judges impressed by the store’s use of digital technology and mission-focused siting.

• A real Scottish Grocer Awards favourite, the Community Retailer of the Year award has been a fantastic vehicle to show off the vital work carried out by self-sacrificing retailers across the country.

Always a competitive category, the 2019 prize was picked up by Barassie Day-Today, Troon – an independent store that still finds the time to support and organise a huge range of community initiatives.

• Another heartwarming award, Family Business of the Year saw judges look for a thriving retail business that’s moving forward and keeping on top of current trends, all while sharing responsibility across a family – and creating a welcoming environment for customers in the process.

The Family Business of the Year for 2019 was One Stop Convenience Store, Airbles Street in Motherwell – run by three generations of the Hussain family.

Never ones to stand still, the Hussains recently joined up with One Stop, added a Post Office and revamped the store, ensuring the business is well equipped for the future.

• Worth a watch for any retailers looking for bright ideas, the Best New Store award was open to convenience stores in Scotland of any size that opened or relaunched between October 2017 and September 2018.

Each finalist could have made a worthy winner, but Spar Halbeath, Dunfermline, was victorious, giving the team at CJ Lang plenty of reason to celebrate.

• It’s no secret that the off sales landscape has changed dramatically in recent years, from the explosion of gin to the rise of craft beer in some quarters.

The Licensed Retailer of the Year award was therefore one which recognised stores that offer a great range and showed evidence of outstanding product knowledge.

Celebrating success yet again, Doonfoot Day-Today took to the stage to collect the Licensed Retailer of the Year gong, with judges highlighting the store’s exceptional spirits range, strong selection of beers, wines and ciders and clever use of social media as major contributors to success.

• Turning to another category where compliance is key to success, the Tobacco Retailer of the Year award celebrated stores with excellent market knowledge, awareness of customer preferences, great systems to ensure availability and effective category management – as well as good staff training and a strict adherence to all regulations.

Family-owned Shawlands News, Glasgow, was named Tobacco Retailer of the Year, with the owners’ impressive use of space and comprehensive range helping the store secure the top spot.

• The Scottish Grocer Awards is all about celebrating the very best in retail – including the employees who are an essential component to any successful business.

Staff are the lifeblood of any business and this year Sasha Henderson of David’s Kitchen, Falkirk, was the star employee of the proceedings. Since starting at David’s Kitchen, Sasha has risen through the ranks to the role of assistant manager, taking a leading role in staff training and demonstrating real pride in her merchandising work.

• With three awards to go, attention turned to one of the biggest prizes of the night – Independent Retailer of the Year. The one everyone wants to win,  judges for this category were searching for a store that could be held up as an example for others to follow.

It was a closely fought contest, but the Independent Retailer of the Year prize was collected by Faraz Iqbal of Premier Linktown Local, Kirkcaldy.

• The penultimate prize of the evening, The Entrepreneur Award, was judged by a panel of experts. Each year the award recognises the entrepreneurial spirit – a quality the 2019 winners had in spades.

From Bourtreehill Supermarket, Irvine, this year’s The Entrepreneur Award was presented to Imran Ali and Sayiad Hamid by Stephen Donaghy of JTI.

The pair were recognised for the incredible investment and improvements made to their store, which started life in 2017 on the site of a former Co-op.

• The last and largest honour of the evening, the Industry Achievement Award, was selected by representatives of Scottish Grocer and Republic Technologies UK.

This year, the panel was on the hunt for a well-kent face respected across Scottish convenience, and they really got their man.

The highly regarded former president of the Scottish Wholesale Association took to the stage to receive his prize – and share some wisdom – a fitting end to a fantastic occasion.