Scottish cheese producer Lactalis McLelland has been making a seriously strong bid to boost brand awareness with the launch of a new marketing campaign spearheaded by a TV ad.

The spreadable range has been appearing during programmes including Coronation Street, Hollyoaks and Come Dine With Me, with further support from print and social media advertising.

The ad promotes the cheese spread range under the tagline ‘The same great Scottish taste, just spreadable’, and highlights the brand’s success at the 2017 Product of the Year awards, where it topped the cheese category.

“The launch of the new Vintage variant last summer was closely followed by the roll out of Seriously Strong Spreadable Squares, which saw the brand tap into the portions segment for the first time.
“These innovations have been extremely well received by consumers and have contributed to brand and category growth.” 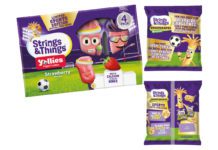 Shaping up for sports