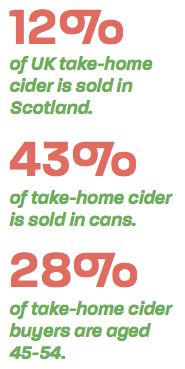 UK shoppers spend £1.06bn a year on off sales cider and perry and 12% of that is spent in Scotland, according to the latest market report from Westons Cider.
It says the category grew by 0.9% across the UK in the 52 weeks to 31 December 2016, following a decline of 2.4% in the previous year.

But in Scotland it is reporting a 0.9% fall in volume sales last year.
The report also reveals that 43% of take-home cider is now sold in cans, with 41% in glass bottles and 15% in plastic bottles. The remaining 1% is sold in the bag in a box format.

The biggest age group among buyers is 45 to 54 year olds who buy 28% of the take-home volume across the UK, with 55 to 64 year olds picking up another 25%. Under 28s account for only 5%.
And despite the growth in other fruit ciders, apple is still the most popular flavour, with 59% of off-trade sales.
Looking specifically at c-stores, the report says: “The convenience-driven missions of ‘for tonight’, ‘replenishment’ and ‘specific journey’ make up nearly three quarters of shopping missions for cider.  Therefore, there is a huge opportunity for convenience retailers.”

• The trend for craft products has reached cider, according to SHS Drinks. Amanda Grabham, head of brand marketing for the Merrydown brand owner, said: “The craft movement is proving to be one of the major driving forces in the cider category, which generates £5.2m worth of sales annually for Scottish impulse retailers.”
The brand has launched a new product and updated an older one for 2017.

Grabham said: “The new addition, Merrydown Crisp Apple Cider, is a 5.5% ABV cider with 30% fewer calories, no artificial colours or flavours and no added sugar.”
She added that Merrydown has re-launched its 7.5% ABV Vintage Medium Cider as Merrydown Original Vintage Apple Cider in a new bottle design.

• Thatchers says cans are an important trend this year, reporting that 44% of off-trade cider volume is now sold in cans.