A Scottish Government funded charity has made noises in favour of a clamp down on licences for convenience retailers in the wake of its latest raft of policy recommendations.

Speaking on BBC Radio Scotland, Alcohol Focus Scotland chief executive Alison Douglas said “it shouldn’t be the case that every corned shop is licensed” and suggested that the current implementation of overprovision measures was not adequate.

Douglas added that government has a responsibility to “control things like availability and marketing” as “we’re seeing that is really affecting children’s attitudes and subsequent behaviours”.

The comments from Douglas followed the release of a new report coauthored by AFS, BMA Scotland and other alcohol-focused health groups, which makes over 40 policy recommendations to the Scottish Government, including a return of the duty escalator, a more stringent approach to overprovision and curbs on marketing. (see comment by Audrey Ferrie) 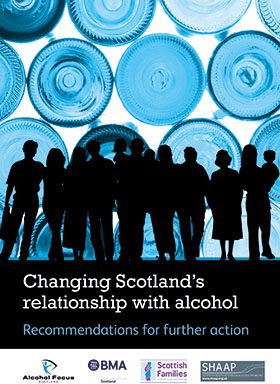 While acknowledging a decline in alcohol-related hospitalisations and deaths since 2009, the report claims more must be done, and estimated the cost of alcohol harm to Scottish society at £3.6bn per year.
The £3.6bn estimate comes from a 2010 report based on data from 2008. Over one third of that estimate is derived from “intangible social costs associated with life years lost”, with 7.5% of the £3.6bn estimate attributable to health service expenditure.

Alison Douglas said the harm figure found in the report “is the most up to date and best figure available and is frequently quoted by Scottish Government and commentators”.

She added that reducing the availability of alcohol is “internationally recognised as one of the most effective ways to reduce harm”, citing a World Health Organisation paper from 2009 that found evidence “from a range of settings which demonstrates the importance of a legal framework for reducing the physical availability of alcohol”, adding that “an increased density of alcohol outlets” is associated with increased consumption among young people as well as “increased levels of assault, and other harm such as homicide, child abuse and neglect”.

David Roberts, director general of the drinks industry supported Alcohol Information Partnership was critical of Douglas’ position, pointing out that drinking among young adults is in decline, and calling into question both AFS’ methods and conclusions.

“They are overstating their case, they’re using old figures and fanciful figures,” he said. “It’s pure speculation. They set out to prove their own point.”

Brigid Simmonds, chief executive of the British Beer & Pub Association (BBPA), which counts a number of major breweries among its members, said the BBPA will be “studying the report and recommendations closely.”
Simmonds said some of the measures proposed in the report “would unfairly burden the whole population” adding that the return of the beer duty escalator in particular would be “hugely damaging to Scotland’s brewers”.

“Alcohol consumption per head has been falling. The industry has been very effective in promoting partnership working, with the government, police, local authorities and others.”

“This partnership approach is clearly working and continues to be the right approach to adopt in Scotland.”
Sukhi Sangha of Day-Today Lochside in Ayr, which picked up the Responsible Retailer gong at this year’s Scottish Grocer Awards, was also supportive of retailers and government working in partnership.

Sangha said that she has a healthy relationship with her local board and an “absolutely fantastic” licensing standards officer.

“I’ve said in the past, alcohol is not going to go away. You’ve got to work with your customer, you can’t pretend it doesn’t exist,” she said.

Sangha added that if her store stopped selling alcohol, customers “would just go and get it somewhere else”.