HAS the British lunchtime become just another snacking occasion?

Quoting a BBC survey of 600 office workers, Key Note says 54% of British workers regularly work through lunch and that 20% feel under pressure to resist taking a break during work hours.

The notion of a lunch hour has largely disappeared and the average UK worker is now thought to spend just 29 minutes taking lunch, down from an average of 33 minutes in 2012. 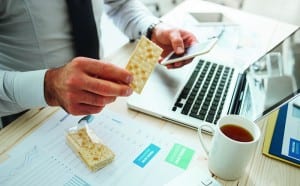 More than half of British workers regularly skip a lunch break and many snack at their desks rather then eat full meals.

And the BBC report says a lack of a formal lunch break means many workers are turning to snacks in the middle of the day.

According to Key Note the traditional sandwich continues to be the most popular lunchtime option. It says the sandwich sector has been bolstered by the rising popularity of convenient, food-to-go solutions, although chilled is still often preferred to hot alternatives such as paninis and baked potatoes.

Key Note quotes figures from a survey by Visa Europe that workers spend an average of £3.69 on lunch, £2.09 on hot drinks every day.

He said: “Research around the eating habits of 18 to 30 year olds highlights that they often skip breakfast, are habitual snackers and despite intending to eat healthily, often prefer sausages and burgers over salads and fruit.”

He added that the research shows 40% of this age group want fast service and 42% are looking for quality and taste, but that only 38% want inexpensive products.

Coleman said that is the thinking behind the latest range of hand-held snacks from Deli Santé including  a Beef and Onion Pasty and Cheddar & Smoked Bacon Wrap.

He added: “Retailers should offer both hot and cold options for breakfast and lunch.” 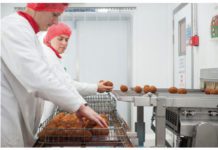 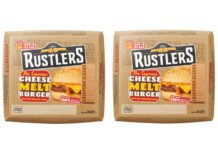 A no mess food to go solution 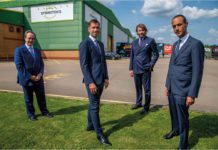