Encouraging more men to drink wine could grow the category by £76m according to Treasury Wine Estates and it has  released a range of specially labelled bottles to attract what it calls an untapped market.
Quoting a survey by Kantar, TWE said only 34% of men aged 18-34 in the UK currently claim to drink wine once a month or more while more than 40% of women of the same age say they do. 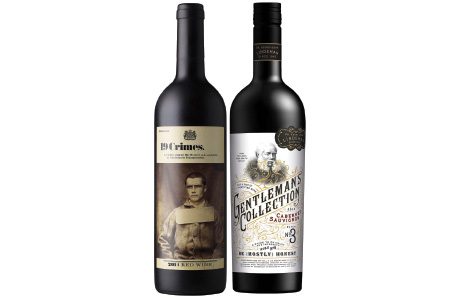 Its new brands Gentleman’s Collection and 19 Crimes have been developed to appeal to the missing men.
The business sector controller for TWE said: “Our consumer research has shown that this group of people are intimidated by what confronts them in the wine aisle.
“They want stories from their brands, authentic heritage, great packaging and recommendations from their peers.
“In 19 Crimes and Gentleman’s Collection we have two brands that will appeal to them as they break down the barriers of wine and offer them something relevant and appealing.
“There is no question that Male Millennials are looking for different things from wine – things that are not being offered to them on shelf right now.”
19 Crimes takes its name from the list of the 19 offences that existed in England in the 19th century, that would see offenders sent to Australia to serve their sentences.
Those offences included bigamy and stealing as well as more specific and unusual crimes such as impersonating an Egyptian.
Gentleman’s Collection, a sub-brand of Lindeman’s, is being launched across the globe.
Initially the range will consist of a Cabernet and a Chardonnay, each containing a dash of fortified wine which TWE says reflects styles in the mid-1800s when Dr Henry Lindeman established the Lindeman’s brand.
The launches are to be supported by a social media campaign.