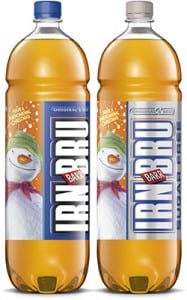 IRN-BRU, the number-one Scottish grocery brand in the Scottish market, has a calendar of phenomenal activity lined up this Christmas, says brand owner AG Barr.
The company reckons the arrival of the brand’s seasonal Snowman TV advert signals the start of the Christmas season for many Scottish consumers. This year, the Snowman is back on screens from 1 December, backed by a linked media campaign incorporating public relations work, digital communications and social media activity.
The Snowman character will also be appearing on 330ml multipacks and two-litre PET packs of Irn-Bru throughout the festive period.
“Irn-Bru’s Snowman advert has won a place in Scottish consumers’ hearts – and we expect the special Snowman packs to fly off shelves this Christmas,” said Adrian Troy, Barr’s head of marketing.
On digital platforms, Irn-Bru is launching its first new Christmas advert in 10 years. It’s another ad on the brand’s Irn-Bru Gets You Through theme.
The brand is also running a Christmas on-pack promotion on its 24 x 330ml Irn-Bru multipacks, as part of its continuing sponsorship of Carnival at the SECC in Glasgow. 5,000 pairs of tickets are to be won in the giveaway activity.
The soft drinks firm says the SECC Carnival last year attracted almost 150,000 visitors.
Irn-Bru Christmas packs include both plain and Carnival ticket on-pack-offer 330ml multipacks. There’s also a range of plain and price-marked four and eight-pack 330ml Snowman-branded packs. And in two-litre packs there are plain and price-marked Snowman-branded packs.
The Snowman packs become available in November and December and the TV ads, digital support communications and new digital advert run from 1 December onward.

• It can be easy to forget that Christmas is an expensive time of year and consumers should be able to make impulse purchases without feeling guilty, argues Maurice Newton, sales and marketing director at CBL Drinks. Its Zack’s Classic sodas have an an RRP of £1.50 for two-litre bottles.
In time for the Christmas season, CBL Drinks has also introduced new 500ml bottles of its 1870s range of mixers. The range includes Tonic Water, Soda Water, Ginger Beer and Lime & Soda. 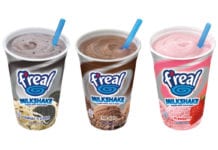 F’real is shaking up demand