Fuel supplier Greenergy has seen continued growth in Scotland since becoming a branded wholesaler for Esso, the company says. The deal, which means that Esso independent dealers can now buy Esso fuel directly from Greenergy, went through in May 2014. 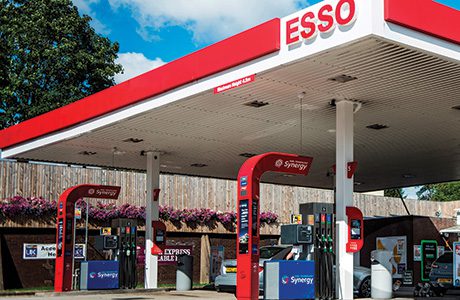 Since then the company, which supplies over 60 sites in Scotland, from single independent forecourts to large groups such as MRH, says the combination has captured the attention of dealers and word of mouth is spreading. The recent introduction of Esso’s new Synergy forecourt and fuel branding is said to have added further interest.
In addition to re-signing all existing customers in the past year, the firm says it has experienced  continued organic growth and now supplies an additional four MRH sites, with another two planned before the end of the year.
Gordon Glen, owner of an Esso-branded site in Alexandria, West Dunbartonshire, said he had seen an increase in fuel volume sales since moving supply to Greenergy.
“They never let me down, and I’m sure that being able to issue Tesco Clubcard points has also played a role in keeping us competitive with nearby supermarkets,” he said.
“We had an unexpected rush of coaches recently, leaving us very close to running out of fuel. Greenergy pulled out all the stops to bring our order forward.”
Greenergy is the sole importer of fuel into Clydebank and Ross, with the added ability of being able to supply from Grangemouth. Greenergy also has a dedicated team of in-house drivers and trucks based at Springburn and Grangemouth.