Have bottled water sales grown and diversified substantially over the decades? Well consultancy Zenith International has this year issued not one but three reports, one covering plain bottled water, one covering “water plus” products and a wider report covering all water drinks.

And they show a booming market. The firm says UK consumption of all water drinks rose by 10% in 2014 to 3bn litres, to reach a retail value of more than £2.4bn. Volumes are now 40 times the level of 30 years ago and represent over 20% of all soft drinks consumed. 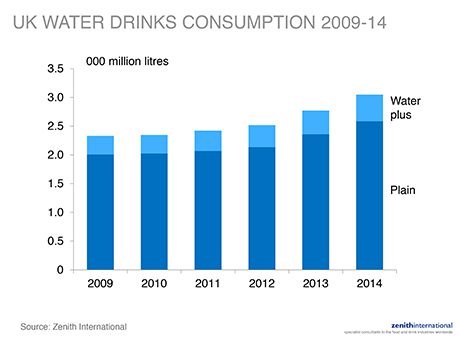 Plain water sales in retail pack sizes jumped by 10.3% to 2.3bn litres and  consumption per person is now over 40 litres a year.  Flavoured, functional, and juicy “water plus” drinks rose 11.5% to 461m litres. Bottled water cooler sales advanced by 4.8% to 282m litres after a period of decline.

Amongst other findings in its 2015 releases Zenith reports:

The top three “water plus” brands by volume were Volvic Touch of Fruit, Calypso Clear and Drench Juicy.

Zenith forecasts continuing overall growth by a further 32% to more than 4bn litres by 2019. 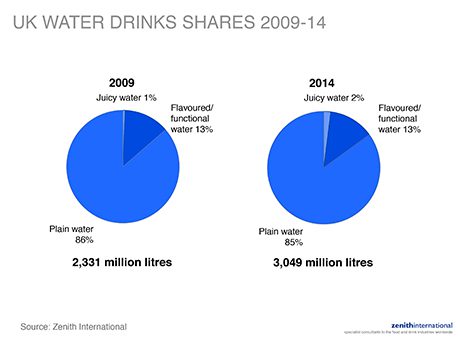 • The growth in sales of “water plus” drinks, led by flavoured waters, which is showing almost double digit year-on-year growth, is a particularly significant trend, according to Maurice Newton, sales and marketing director at CBL Drinks.

The category is crying out for the return of “sensibly priced, no-nonsense brands” such as CBL’s Perfectly Clear, he argued.

He said functional waters have also shown impressive growth  and products such as the firm’s Bio-Synergy Skinny Water have gained interest from national retailers and independents.

Consumer preferences for shopping little and often present  opportunities for convenience retailers to sell larger formats and multipacks, he reckons. CBL Drinks launched a six-bottle multipack of its flavoured water, Perfectly Clear earlier this year. The six-bottle multipack is available in Strawberry and Lemon & Lime flavour variants and has an RRP of £2.99 – £3.49.

“With both immediate and future consumption on the increase, it’s advisable to offer a choice of both small and large bottles, as well as multipacks, whilst also ensuring that smaller bottles are stored in the chiller,” she said.

“Glaceau Smartwater was launched last year, as Great Britain became the first market in Europe to offer America’s best-selling premium bottled water, in-line with research highlighting that most bottled water brands focus on source, leaving a gap in the market for an entirely different proposition.

“Glaceau Smartwater offers a vapour-distilled water with added electrolytes for a clean, crisp taste. It has been designed to target an audience including young professionals, who are among the most frequent bottled water consumers.

“Glaceau Smartwater has RRPs of 57p for the 600ml version, and 89p for 850ml, helping retailers to offer a high level of perceived value to shoppers.”