Unilever UK is rolling out a new advertising campaign for Marmite to support the launch of its limited edition summer spread, available to buy until September. 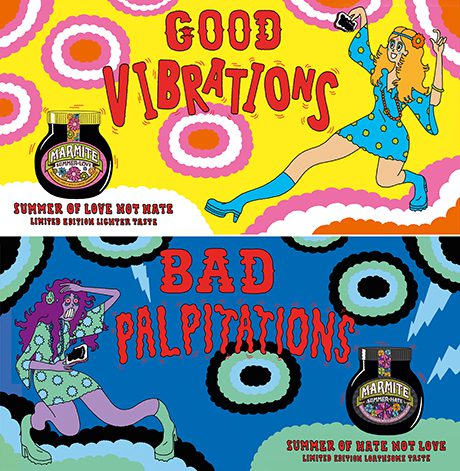 ‘The Summer of Love Not Hate’ campaign, created by adam&eveDDB, takes design inspiration from Woodstock summer of love in 1967 and aims to encourage the nation to ‘spread the love’ this summer. The campaign will include an animated online film featuring a music battle between a colourful kitten and a crazed rock monster vying for supremacy over the new summer jars. The film will be available to watch on YouTube and Facebook.

Made with 100% lager yeast for a lighter blend, the new limited edition variant is described as a delicately flavoured adaptation of the traditional recipe that has been loved (and hated) by consumers for many years.

In keeping with Marmite’s opinion splitting ways, the new summer flavour will come in two illustrated ‘Summer of Love’ and ‘Summer of Hate’ jars.