Scots are continuing to buy fewer national newspapers and the big two tabloids are suffering badly according to the latest report  from independent auditor ABC. 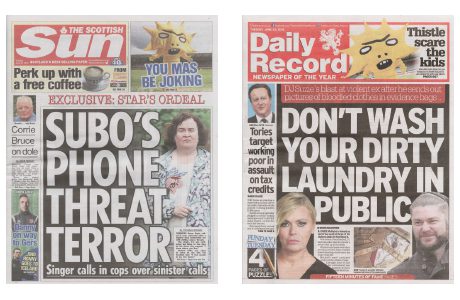 In May 2015, total average daily newspaper circulation in Scotland of national newspapers that feature on the monthly ABC chart (which does not include  publications like The Herald, The Scotsman, The Press and Journal or the Courier) was 660,277, down from 729,536 for the same month last year.

Bucking the trend, sales of The Independent were up, from a very low base, by 1% and The Times recorded a jump of 6% to sell a daily average in Scotland of almost 20,000.

The Daily Telegraph lost 5%, and The Guardian and ‘i’ were each down by 6%.