LAST summer the sun put in an appearance and had thirsty folks reaching for juice drinks.

Dave Turner, trade communications manager at Coca-Cola Enterprises (CCE), quoting Nielsen figures, said: “The juice drinks sector represents a great opportunity for retailers at present, having enjoyed overall growth of 15.2% in independents and symbols over the past year.”
And it’s not all about instant refreshment. “Both immediate and future consumption formats are driving this increase in sales, growing by 16.1% and 10.3% respectively,” he added.
CCE overhauled its Oasis brand in the spring; the new packs feature clearer fruit graphics and a refreshed design. The changes were supported by the first ad campaign for four years.
Its Oasis Mighty Drops super-concentrated squash, aimed at consumers who want to perk up their bottled water, comes in Mixed Berry, Mango and Raspberry Lemonade flavours. 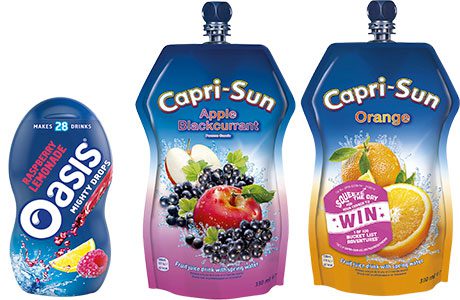 “Water enhancers are the newest innovation in the juices sector,” Turner said, “and are a great way to liven up a bottle of water while providing value for money for consumers.
“The super concentrated drops of squash can be added to water while on the go to create a refreshing juice drink. They are convenient to store in a bag and easy to use whenever needed.
The firm’s Capri-Sun 330ml pack has also been redesigned, emphasising the brand’s use of spring water, in an attempt to communicate what CCE calls “the refreshment message” and appeal to young adults. The orange flavour is available in an 89p PMP.
Those young adults – the company defines them as aged 20-30 and calls them “millennials” – are the target for Capri-Sun’s Squeeze The Day promotion. The promo offers consumers the opportunity to win once-in-a-lifetime experiences. It’s running on more than 6m packs, including the PMP, and is backed by point-of-sale materials.
[hr]
15.2% Growth in juice drinks in independent and symbol stores – Nielsen, 12 months to 14/4/2014
[hr]
16.1% Growth in juice drinks (for immediate consumption) in independent and symbol stores
[hr]
10.3% Growth in juice drinks (for future consumption) in independent and symbol stores.