THE generation known as “millennials” is the target of a £2m ad campaign for the latest variety of Tic Tac, Apple Burst. 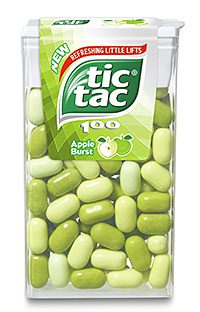 Millennials are aged between 13 and 33 and described as “brand savvy and time-deficient”, with an estimated spending power of £125bn according to trend spotters The Future Laboratory.
A TV push, starting on 6 May, will be supported by POS including wobblers, shelf strips and an apple-shaped counter display.