If you’re looking for a staple item you don’t have to look much farther than bread.

Almost all of the UK population buys the product. Kantar Worldpanel discovered that virtually everyone succumbs to the lure of the crispy crust, the chewy sourdough or the nostalgic pleasure of a plain loaf at some point in the year. And it’s a key product for convenience stores – Nielsen calculates it was worth £269m in impulse outlets last year.
Within the sector, half-and-half is the fastest growing type of bread. Healthier than white, less scary than wholemeal, Nielsen figures show it is growing at 9% and now accounts for an 11.7% value share of the market, worth £210.5m. 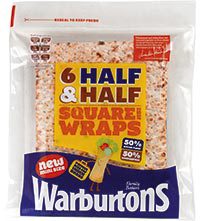 Warburtons has a full half-and-half range, including its Toastie and Medium loaves as well as rolls and wraps. “Consumers are increasingly seeking out healthier options which provide additional nutritional benefits for themselves and their families,” Warburtons’ Martin Baptie explained. “Our Half & Half range provides a nutritious option with all the taste credentials of white bread and is the ideal choice for those buying for children.”
The company has also identified sandwich alternatives as a growth area, up 14.5% in value last year according to Nielsen. Its range includes Sandwich Thins, Square(ish) Wraps and Sandwich Pittas. According to Baptie: “In the last year the Warburtons’ range of sandwich alternatives has shown phenomenal value growth of over 101%.”
Kingsmill has also seen its 50/50 range growing well, becoming the fastest-selling healthier white brand, it says, quoting Nielsen. It has also identified breakfast as a growth area for baked goods. Its Fruit & Fibre range was launched to give consumers a new taste at the start of the day. Allied Bakeries, owner of the Kingsmill brand, also points out that Scots are particularly keen consumers of bakery products, with Nielsen showing 125% growth in sales of brioche, a 28% increase in fruit bread, and waffles up 21%. Kingsmill has two varieties of brioche: plain, and milk chocolate chip. 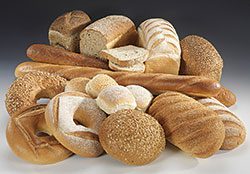 As well as the growth in half-and-half products, specialist producer CSM International notes that “the entire high-fibre, low-GI, seeded breads sector is performing very well in the UK”. Quoting figures from Allegra Strategies, Helen Sinclair from CSM said: “The fibre category on its own is performing particularly well with 47% of people questioned in a recent survey stating that they were buying added-fibre products, an increase from 44%.”
• In-store bakery specialist Cuisine de France notes that freshness is many customers’ priority when choosing bread, with Mintel research showing that 64% think bread baked in-store tastes better than the wrapped variety. “If baking in-store, it is vital retailers communicate they are doing so,” said Cuisine de France’s Laura Smith.
The company’s recently-launched organic brown bloomer won gold for best new bakery product at the British Frozen Food Federation Awards. Its La Brea Bakery offers sourdough and artisan part-baked breads including a country-white sourdough oval, a pecan and raisin loaf and a roasted garlic loaf.

Images – Top, Bread and bakery products made with half wholemeal and half white flour are becoming a fixture at the nation’s breakfast tables and in their lunch boxes. The average Brit eats 133 sandwiches a year. Above, Bread and bakery ingredients supplier CSM International says seeds and grain products take 13% of the bread market. The seeds and grains lines are growing in both value and volume, it adds.