Like Laurel and Hardy, Batman and Robin, and Ant and Dec, summer weather and soft drinks sales make for a very successful partnership.

When the sun comes out retailers will inevitably see an uptick in their chilled drink sales – but many could be doing more to maximise the opportunity.

So when it comes to advice on how to improve your soft drinks offering, who better to ask than the three top soft drink retailers in the country?

Spar Thornliebank, Londis Solo Convenience and Clydebank Co-op KeyStore Kilbowie were the three Soft Drinks Outlet of the Year finalists at the 2019 Scottish Grocer Awards, with Clydebank Co-op Kilbowie crowned as the winner on the night.

We caught up with the three retailers behind these successful soft drinks operations, finding out just how important the weather is when it comes to sales in chilled drinks.

“When the weather is good, demand is very high – with water and things like that.

“There’s a swing park not far from us, so people come in and pick up juice and crisps on the way to the park.

I find that new products and new flavours of soft drinks are good for getting social media attention.

“It is crucially important to keep it cold. I have Lucozade on offer just now and the ambient bins are full and the chiller is empty.

“People don’t touch the ambient, they just want it chilled.”

No one knows more about the importance of keeping soft drinks cold than Natalie Lightfoot, co-owner of Londis Solo Convenience in Baillieston.

She has built a reputation around having the coldest drinks in her area, which attracts high footfall throughout the day.

“Everybody has always loved that they can come in here and get it cold — like really cold.

“I also put my 2L bottles in the fridge, which not a lot of people do. When the weather is good, that is the number one thing that they are coming in for.

“People want an instant refreshment right there and then: so you need to make sure that your fridge is serviced, and well looked after.”

For Natalie, soft drinks are a crucial part of her business, accounting for between 15% and 20% of her total sales in store.

With a considerable chunk of her business being focused around soft drinks, it isn’t surprising that Natalie pays close attention when the latest NPD  is released. 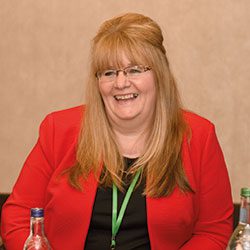 We have televisions in the store and sometimes we run promotions on them. They are actually situated opposite to our juice.

She has found that cold coffee drinks have been performing particularly well in recent months, along with American soft drinks.

“We are always looking for new product development and trying to get the next best thing.

“I welcome new products, but I am picking and choosing, I stay in control of it.

“I find that new products and new flavours of soft drinks are good for getting social media attention. We take pictures of new products and post things like ‘Have you seen this?’ or ‘Do you want to try this?’

“It’s really good, and that is how we have grown our social media following. It encourages people to come into the shop and see what we offer.

“Social media is a really great way to listen to people, and also influence the customers.

“They might not realise that they want to try a new product, but then you can show them.”

Gerry Haughey, store manager of Spar Thornliebank, said that although stocking new flavours may seem like an initial gamble, they will eventually “start to tick over.”

“They are certainly starting to pick up now, customers are looking at it as something different. I welcome all the new products coming in, it gives the customer variety and some different options.” 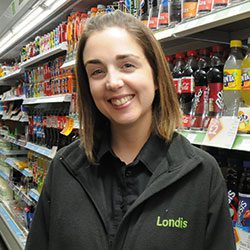 People want an instant refreshment right there and then: so you need to  make sure that your fridge is serviced, and well looked after.

But while new products might be encouraging footfall, how are the traditional soft drinks brands performing post-sugar tax?

Gerry Haughey, said he was “concerned” when the levy was first introduced, but that he hasn’t seen any reduction in his overall soft drinks sales.

“When it comes to sugar, I think it is the government more than consumers who are concerned about it.

“I understand why they are trying to do it, but I don’t think it is making much of a difference. The people who want Coca-Cola are still going to buy it.

“The biggest thing that customers were saying was that they could taste a difference in the Irn-Bru.

“I think by not reformulating,  Coca-Cola saw better sales than Irn-Bru, even though its price had gone up.

“I think Irn-Bru should have stuck with what Coke did, rather than reformulating, because customers can certainly taste the difference.”

Irn-Bru isn’t selling as well. Our Coca-Cola rep came in, and he said that for the first time in 12 years, Coca-Cola is now the leading brand in Scotland.

This was echoed by Tracy, of Clydebank Co-op who said that Coca-Cola was “starting to come back out on top.”

“It was always Irn-Bru, they were always highest, but with their changing the recipe, it just isn’t selling as well.

“Our Coca-Cola rep came in, and he said that for the first time in 12 years, Coca-Cola is now the leading brand in Scotland.”

And while the sugar tax might be only one year old, the government is already discussing the next potential legislation: a ban on selling energy drinks to children.

Tracy already has a ban in place for selling energy drinks to under 16s, and has changed her soft drinks range as a result. 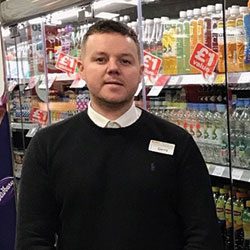 We got new chillers installed a year and a half ago, energy saving chillers, and they are just remarkable the way they hold the coldness of the drinks.

“We are doing an awful lot of diet juice, and zero juice. We have doubled the facings of all our diet and zero formats, and we have cut the full-fat ones down to one facing.

“We are trying to promote the healthier options in store. Because of our restrictions on energy drinks we cut back on that, and thought we would try a healthier option to see  whether it would improve or decrease our sales.

“And the sales have basically stayed the same. We decided to take up the mantle and start now, rather than waiting for it to become law.

“And I’ve definitely not seen any decrease.”