PROVIDING high-quality everyday indulgence is at the heart of the chocolate business of Mackie’s of Scotland, says the firm.

Mackie’s chocolate is now made in a £650,000 purpose built factory at the family firm’s Aberdeenshire farm.

The firm, which also produces ice cream and is involved in the  Mackies at Taypack crisps and snacks joint venture, aims to be selling £3m worth of chocolate within five years. It says it’s the only company making chocolate on such a scale in Scotland. 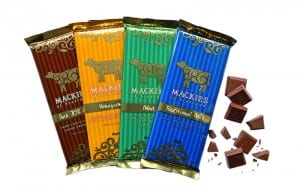 And there are now plans to make all four flavours available in 35g impulse-sized bars.

Commercial director Bill Thain said: “We know that the small bars are going to be popular – we’ve been asked to provide these by many of our customers.”

Another flavour will be decided by a public vote due to close on 14 March.

Marketing director Karen Hayhow said: “The recent campaign to recruit a chief chocolate taster hit global news networks as it was described as the sweetest job in the world.

“The final phase, a public vote  on the final two flavours, is underway on social media.”

“This will help us launch new flavours and to find ways to improve our existing chocolate range.”

Mackie’s chocolate is made with Scottish ingredients and the honeycomb bar contains puff candy also made on the farm and used in Mackie’s honeycomb flavour ice cream.