‘We’ve been missing the Scottish dietary goals for the last 15 years, despite the range of changes already made’.

FOOD Standards Scotland – the country’s new public sector food safety and nutritional policy body – is recommending that the Scottish Government consider a sugar tax, regulation of food and drink promotions, and  portion size reductions, if the food manufacturing and retail industries don’t come up, within a year, with plans to dramatically improve on current efforts to change the Scottish diet. 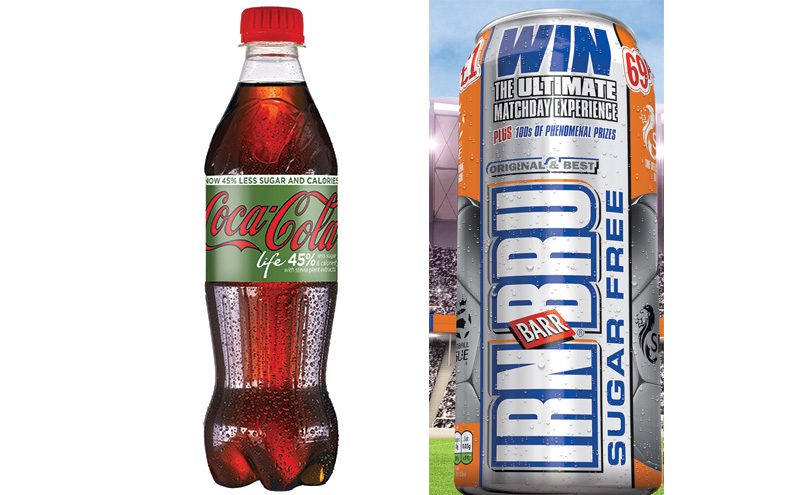 Soft drinks include many no-sugar and low-sugar products and purchases of sugar soft drinks has fallen. But overall sugar consumption is high says FSS

The move came after the board of FSS discussed work carried out by the organisation and a report on food and drink purchases into the home in Scotland based on Kantar Worldpanel data.
And FSS chair Ross Finnie made it clear the organisation thinks radical changes are required because efforts so far have failed to deal with major problems related to the diet followed by many Scots.
Describing the current situation as a “time bomb” Finnie said: “We know that we have been missing the Scottish dietary goals for the past 15 years, despite the range of changes already made, so the board’s view is that a raft of alternative, more radical measures and interventions must be considered and introduced if we are to have the impact that is needed.
“We know that in Mexico a 10% tax reduced the purchase of sugar-sweetened soft drinks by 12%.
“It’s key that industry plays its part in finding solutions, which is why we accepted the suggestion of giving manufacturers and retailers 12 months in which to come up with an alternative acceptable solution to a sugar tax, and to propose action when it comes to re-weighting promotion of foods in favour of healthier options.
“But we are committed to improving dietary outcomes in Scotland, so if industry proposals fall short, we believe we should actively pursue other avenues, including taxation.”
FSS said the report on food going into Scottish homes, as surveyed by Kantar Worldpanel, confirms a lack of progress towards health and diet goals in Scotland.
“Despite reductions in the purchase of soft drinks containing sugar, down by 21% since 2010, total sugar purchasing has not changed,” the organisation said.
The report also “confirms the large quantities of discretionary foods such as sweets, chocolate, crisps, savoury snacks, biscuits, cakes, pastries and sugary drinks being consumed by consumers in Scotland”  and “quantifies the increase in purchase of these foods and drinks in the lead-up to Christmas, when on average, an additional 9000 calories is consumed by every adult in Scotland”.
We plan an in-depth analysis in our next edition. What’s your view on a sugar tax? Contact Patrick Duffy 0141 567 6074 patrick.duffy@peeblesmedia.com