LAST year 8.3m households bought early for Easter and 80% of shoppers bought again before the big day according to Nestlé Confectionery.
The Smarties and Milky Bar brand owner said Easter sales are in long-term value growth, showing an increase from £319m in 2011 to £340m in 2015.
A spokesperson said: “The early season is important for retailers and those looking to maximise sales should ensure they stock up on Easter impulse lines as soon as the Christmas season is over.
“However, 50% of all sales are still made in the late season, highlighting the importance of stocking the right packs at the right times, and ensuring availability right up to Easter Sunday.”
Saying that 70% of Easter confectionery sales come from immediate-consumption products, Nestlé values Easter seasonal impulse confectionery at £122m and says its Smarties Little Choc Chick is the third-most popular novelty in the market and that its Milkybar Bunny is number four.
But sharing products also showed growth last year. The company said sales of mini eggs grew by 2.2% in 2015 to a value of £57m. It is introducing Black Magic Mini Eggs for the 2016 season.
The spokesperson said: “The majority of mini eggs packs are designed to appeal to shoppers with children, however 67% of mini eggs shoppers do not have children.
“Thus there is a huge opportunity for a more grown-up offering.”
Saying that the kids added-value segment is up 46% since 2011 and showed 3% growth in 2015, Nestlé has introduced the Smarties Chick in Egg.
The firm suggests 45m medium eggs were bought by 9m households in 2015 and that adult eggs were up 5.5% in 2015 recording sales growth of £30m. Nestlé launched a range of special chocolate eggs in 2015 including two flavours of Matchmakers eggs and a Nestlé Crunch egg.
Nestlé Crunch is being launched in the giant eggs market segment for this Easter season.
The large milk chocolate egg pack includes a selection of milk chocolate and white chocolate Crunch bars.
The Nestlé spokesperson said: “Our 2016 range will ensure convenience retailers can capitalise on the Easter opportunity by delighting consumers and shoppers with an innovative collection.” 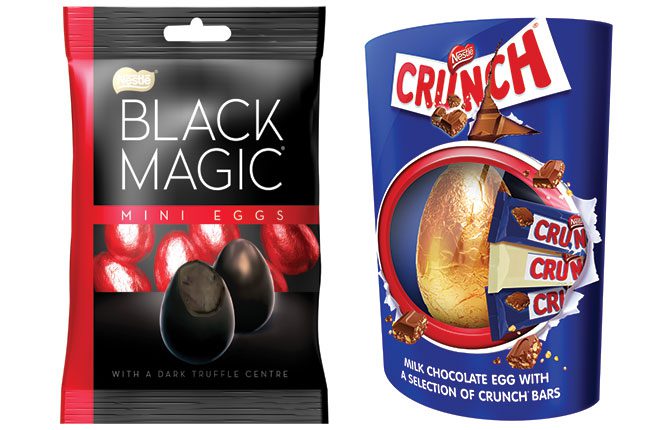