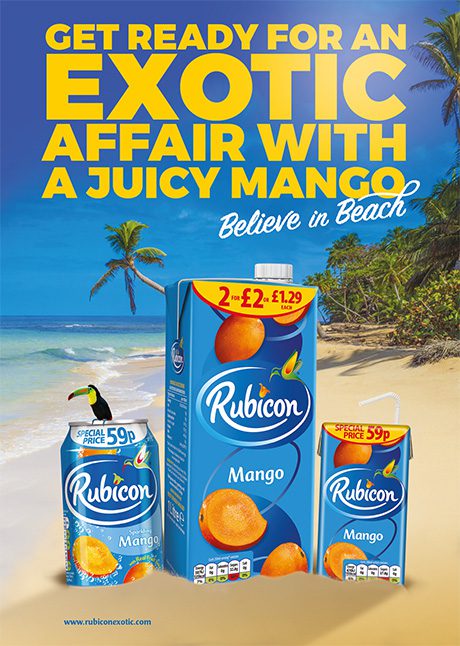 AG Barr has launched a £2 million campaign for its exotic juice drink Rubicon.

The campaign, themed ‘Believe in Beach’, runs throughout September and comprises a new national TV campaign screened on terrestrial and satellite channels.

The commercial also features on VoD (Video on Demand) and will be complemented by extensive social media (Facebook and Twitter) and sampling activity.

“Rubicon is the nation’s favourite exotic juice drink brand and continues to outperform the soft drinks market,” said Adrian Troy, AG Barr’s head of marketing. “The new advertising encourages consumers to shake off the ordinary and release their exotic inner self by drinking Rubicon.”

The campaign will be supported by a range of exotic-themed POS including posters, dump bins and shelf stickers.

Rubicon already accounts for one third of all exotic flavours sold in the UK, growing ahead of the soft drinks category at 2%, according to Nielsen figures quoted by the company.

A G Barr is urging retailers to capitalise on this sales opportunity by utilising in-store Rubicon POS and building eye-catching displays to boost their profits.