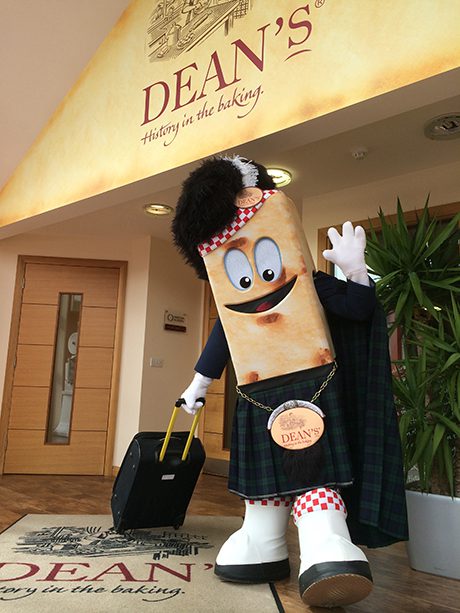 This August, to celebrate its 40th anniversary, premium Scottish shortbread and biscuit manufacturer Dean’s, is letting loose its mascot ‘Shortie’ on a month-long tour of Scotland

From the Lonach Highland Gathering to the Edinburgh Fringe Festival and from running in the Perth Kilt Race to captaining the RRS Discovery in Dundee, the kilt-wearing giant shortbread finger will be engaging with the public and handing out some of the shortbread for which Dean’s is known, aiming to raise awareness ahead of the brand’s re-launch in 2016.

Shortie will also be taking selfies of himself with members of the public and encouraging them to tag themselves via social media channels Facebook, Twitter and Instagram to win daily prizes of luxury hampers with further prizes available to participants on the Dean’s website.

Siobhan Ingram, brand manager at Dean’s, ​said: “Our much-loved mascot Shortie likes to get out and about and what better way to celebrate our 40th anniversary than sending him to key events, cities and beauty spots across Scotland to give away some of our delicious shortbread.”

Regional Director of VisitScotland​, ​​Phillip Smith added: “This is a fantastic year for Scotland as we celebrate the rich and distinctive taste from across the Scottish regions. We’re delighted to see one of Scotland’s key manufacturers of Scottish produce celebrate a milestone anniversary and are excited to follow Shortie’s route throughout Scotland.”

Shortie and members of the Dean’s team set off from their home in Huntly,​ ​Aberdeenshire ​on ​Wed 29th July. Follow his progress at www.whereisshortie.com