TREK, the wholefood energy bar and flapjack range from Natural Balance Foods, is being marketed to health-conscious men as part of a campaign running this summer.

Marina Love, marketing director for Natural Balance Foods, said: “Trek is already performing strongly – sales are now £3m – an increase of 313% year on year. Its success comes as consumers – particularly those who are already interested in health and fitness – look to swap less healthy choices for products that are made with natural ingredients and minimal processing. In fact, research shows that some 40% of consumers are switching to healthier snack alternatives  and one in four consumers look for nutritional benefits when choosing a snack.” 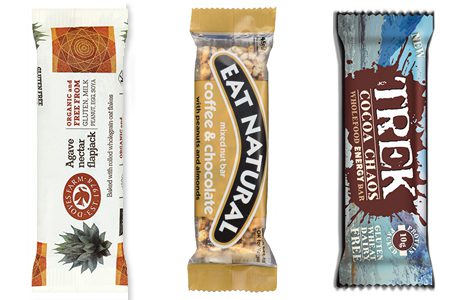 • Eat Natural, the fruit and nut bar company, has promised to invest in new machinery, people, and markets this year.

Co-founder Praveen Vijh said: “Market forces have collided in the past 12 months, seeing a jump in desire for wholesome snacking together with a hungry appetite for British brands in the export market.”  2014 saw the brand grow by 11% against a background of a static cereal bar market, he added.

The company says much of its recent success is down to the introduction of a ‘category first’ single-serve pouch of its Toasted Muesli with Buckwheat as well as three new gluten-free bars – Peanut and Popcorn, Chocolate and Coffee, and Protein Packed.

• Doves Farm is launching a range of flapjacks free from gluten, milk, peanut, egg and soya. The six varieties are: Agave Nectar, Fig and Linseed, Banana and Hemp, Chocolate Chip, Apricot and Chia, and Apple and Sultana.