PURCHASING chilled items is the number-two reason  for visiting a c-store and shoppers who buy chilled lines spend almost double the c-store average, according to Susan Nash, trade communications manager at Mondelez International. She said: “The trend towards shopping little and often also means that consumers are increasingly using small stores to top up on traditional grocery items.

“Retailers should look to tap in to this and ensure they fully understand how to unlock the potential in the chilled and dairy category.”

The Mondelez portfolio includes the £105.4m brand Philadelphia and the £88m Dairylea. There has been recent activity on both. 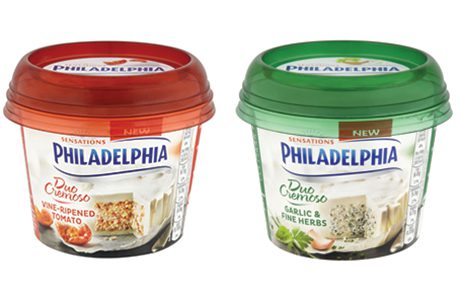 Philadelphia Duo Cremosois is a new product. It’s a whipped core inside a Philidelphia coating that Mondelez describes it as an indulgent evening treat. And  Simply Stir has been given a new look.

Dairylea is being supported with a promotion, on Dairylea Dunkers multipacks, Stripcheese and Lunchables packs, that gives consumers the chance to win annual cinema passes.

• New types of cheese pack are boosting consumers of cheese as a snack, according to Arla Foods. Senior category cheese director Matt Walker said: “The increasing number of formats that are now tailored for snacking and convenience have encouraged further consumption, with Mintel suggesting that 23% of cheese shoppers eat cheese as an alternative to other snacks such as chocolate or crisps.

“Consumers are also becoming more adventurous with their cheese choices.”

• Snack-sized cheese Mini Babybel is asking shoppers to become a laughing Babybel for Comic Relief. A web app allows shoppers to upload pictures and have their faces superimposed onto a Mini Babybel. The brand will donate 25p to the charity for every post.

Bel UK marketing director Steve Gregory said: “Mini Babybel has been a Red Nose Day partner for the past 10 years and we are putting all our support behind the make your face funny for money theme in 2015.”