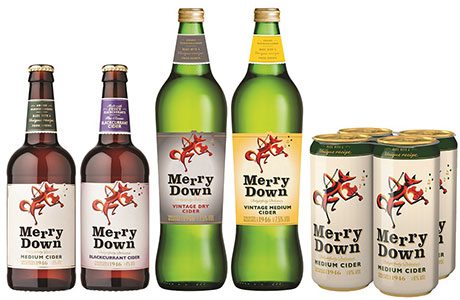 FOOD matching will be a priority for Merrydown promotion in 2015.
Debs Carter, marketing director alcohol at SHS Drinks, said: “Cider and food matching represents a great opportunity for retailers.
“We’ve developed a series of traditional recipes with a cider twist and have included a series of seasonal recipes on the Merrydown website which not only go well with Merrydown, but use the cider as a cooking ingredient to provide inspiration for consumers.”
She added: “The growth in sales of flavoured cider has been phenomenal and the flavoured cider sector is still very much in its ascendancy.”

• David Sheppy, managing director and head cider maker at Sheppy’s, said: “Cider can be paired with many things, so a well thought out display would really highlight the ciders on offer.
“Nowadays customers expect a better choice and quality. Sheppy’s range includes a smaller serve 330ml bottle in three varieties – Oakwood, Somerset Draught and Raspberry.
“Our Oak Matured Vintage won four awards in 2014.”