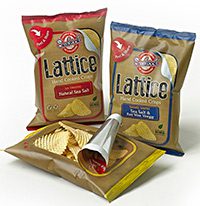 WHAT’s claimed to be the UK’s first peel-front crisp packets have been launched by Seabrook Crisps on its Lattice Cut crisps range.
The new packs, which allow consumers to peel open the front of the packet to share its contents, were released into convenience and foodservice channels last month.