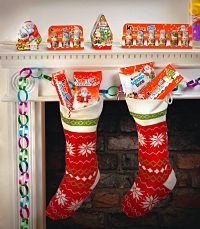 New Kinder Figures 15g will be launched in a three-pack (RRP £1.25) and six-pack (RRP £1.99).
Ferrero says Kinder Kids performed exceptionally well during 2013 with 42% growth year on year, which in turn boosted festive sales for retailers.
For the second year and for periods before, during and after the festive season, Ferrero last month launched Kinder Surprise Pink and Blue eggs.
Ferrero says more than 81m Kinder Surprise eggs (which feature a chocolate treat and a toy) were sold in 2013.
The firm says research undertaken before last year’s launch indicated that parents would welcome Kinder Surprise Pink and Blue, with two thirds agreeing that having different coloured eggs made it easier for them to choose the most relevant treat for their child.
And after the launch that proportion increased to 82%.