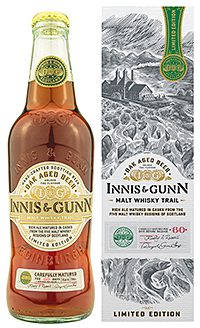 Turnover to end 2013 was up 15% year on year to £10.5m.
The company, which specifies ales which are then brewed for it, also financed the design and development of new Oakerators – the vessels that are used to mature its beers – which were put into production in December 2013.
International sales performed strongly, it said but it described its growth in the UK off-trade as exceptional and said IRI figures showed its Original is now the best-selling bottled ale by value in the Scottish off-trade.
But Crawford Sinclair, UK director of sales says that while the giant supermarkets are doing well out of craft beers, smaller shops could be missing out.
“We’re seeing a huge rise in craft beers,” he said.
“Unfortunately, no more space is being given over to craft in the independent c-stores.
“So, during key trading periods, the fast-selling craft beers are unavailable.
“With limited space, c-stores should stock a variety of the best-selling beer styles in smaller formats.
“The mults are taking the category more and more seriously and giving both craft and regional beers more space, even in their c-store formats,” he said.