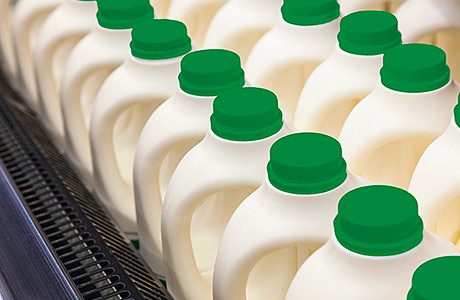 IF you’re looking for a product category that illustrates the tough fights that are going on for the consumer pound in the UK in 2014 you don’t have to look further than your store’s milk fridge.

We now appear to be well settled into a price war on mainstream milk that’s been taken up by giant supermarkets, the booming discounters, pound stores, high street drugstores, frozen food stores, and others.
All of which isn’t welcome for traditional c-stores like independents and symbol outlets, for whom milk has filled a key role as an everyday essential that consumers traditionally buy regularly and locally.
So, what’s the state of play now? Are some types of milk more heavily affected than others? And what can c-stores do to protect their milk sales?
The latest figures on the milk industry information organisation Dairyco’s web service Dairyco Datum, quoting Kantar Worldpanel figures for the year to 20 July 2014, show milk volumes up year on year. But sales value has dropped recently as a result of what the organisation said were lower average prices introduced by the major retailers in March.
In volume terms pasteurised milk (by far the biggest part of the market) was up by 4.4% but expenditure rose only 2.3%. That outcome appears to be down in part to a fall in price per litre on pasteurised milk of 2% over the year.
Filtered milk on the other hand saw volumes down by 13.4% at a time when its price per litre increased by 5.3%.
Organic milk and Jersey and Guernsey milk sell only small amounts in comparison to the mainstream products but volume and value sales were up in both sub-categories.
Trends have made life tough for c-stores when it comes to milk sales.
Dairy Crest shopper marketing director Adam Mehegan, also quoting Kantar data, said sales of white milk through discounters are up 15% in the year to July. Over the same period, he noted, independents and symbols saw a decline in milk sales – a drop of 10%. And there were several reasons including a drop in penetration (in other words fewer households are buying milk from independent and symbol stores) and a drop in the amount bought on each trip.
Four-pint bottles, while still the biggest-selling packs in independents and symbols, have been hardest hit by the decline, value sales are down 14.4% year on year. However single pints are on the increase, sales rose 3.5%.
Skimmed milk is the only one of the different fat-level categories of milk that is holding its own in independents and symbols, he said. Even there the number of purchasers was down, but those who did buy skimmed milk though their local shops were buying more of it.
So what can the independents and symbols do?
Mehegan suggests offering a good range of pack sizes, especially one-pint packs of the various types of milk.
Top-up is given as the main reason that shoppers buy milk in independents and symbols and Mehegan suggests making it quick and easy for them by positioning items close to the front of the store.
Cross-category merchandising with other staple grocery items such as bread, fruit and vegetables might also help, he suggests.
And he stresses that flavoured milk products, including Dairy Crest’s Frijj range, are in growth. Displaying them prominently and using them in meal deals could boost sales, he says.