MULLER Wiseman Dairies provides around 30% of the fresh milk consumed in Britain every day. And it produces and markets a full range of milk brands including the country’s first semi-skimmed milk, Freshnlo as well as The One – with 1% fat.

But it says the star of its show, is Müller Wiseman Black and White brand milk, which celebrates its 25th anniversary this year and is now worth over £100m a year.
There are six regional labels in the portfolio, which the firm says helps retail customers meet the increasing consumer demand for “produce with provenance”.
Earlier this year Müller Wiseman told Scottish Grocer that in Scotland, Black and White is worth nearly £24m and has a Scottish market value share of 9.4% and a total volume share of 7.4%.
Included in the Black and White range are Milk from Scotland – milk that is sourced, processed and packaged in Scotland. And the Grampian regional label is designed to help consumers make the connection with farms in the area and with the company’s Aberdeen dairy and the distribution network in the north-east and Highlands.
Sandy Wilkie, Müller Wiseman sales and marketing director, said:
“Consumers increasingly demand traceability within fresh produce and by offering milk with a clear link to the area where it is produced, without adding cost to the retailer, we can add value to our milk which can be passed on to consumers in the form of confidence, peace of mind and pride in quality regional milk and products.”
Other Müller Wiseman brands include Freshnlo, the UK’s first semi-skimmed milk.
“We were thrilled to support Freshnlo Pedal for Scotland once again in 2013 for its fifteenth year, which saw over 10,000 riders take part in the iconic ride from Glasgow to Edinburgh in September,” said Wilkie.
And the firm says it has seen “a staggering increase” in The One – its 1% fat milk which celebrates its 10th birthday this year. 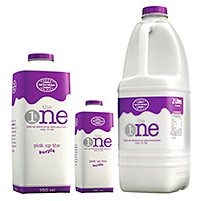 The One, Britain’s first 1% milk when it launched in 2004, was ranked at number 17 on the Kantar Worldpanel annual ranking of Scottish Brands in the Scottish market in 2013 – well up on 2012.
Other surveys show it joined the top 10 fresh milk brands in Britain in 2013, growing value sales by 311% to reach a brand value of over £19.5m.
That was down to increased distribution and availability throughout Britain, combined with the increase in consumer demand for healthier dairy options without compromising on taste, said Wilkie.
The brand also did well in Scotland, where it is more established but nevertheless saw a 60.85% rise in value from 2012.