CONVENIENCE is the key when it comes to persuading more consumers to try a hot breakfast. That’s the word from Quaker, which is adding porridge in a cup to its oats-based portfolio.

The new Quaker Oat So Simple Cuppa Porridge range will be launched next month, supported by a winter-long promotional campaign.
Meanwhile Oat So Simple Multi-grain, launched at the start of the year has, the company claims, helped retailers by offering more choice and appealing to new and existing Quaker consumers. 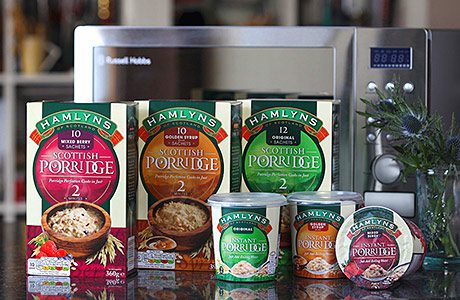 • Hamlyns of Scotland is sponsoring the new series of ITV daytime show, Let’s Do Lunch With Gino and Mel. The ad slots will be used to unveil revamped packaging for its traditional ranges of Scottish Oatmeal and Scottish Porridge Oats. They will also be used to promote the company’s range of porridge sachets and pots, which it launched in April.
Both products are available in three varieties: Original, Golden Syrup and Mixed Berry.
• Fuel Your 10k Hours is another player in the breakfast market. Listed by Nisa and several multiples, its range includes Chunky Granola, Instant Porridge and Liquid Breakfast (a flavoured milk drink with fibre and vitamins).
Introduced this year are new flavours of Instant Porridge – Chocolate, and Honey Nut & Raisin – and Porridge sachets to make in a mug.
• Added protein is the secret ingredient in USN Whey & Oats. The company says the protein porridge is designed to keep users full until lunch.