THE Post Office is the UK’s high street hero according to a wide-ranging survey undertaken by the Association of Convenience Stores (ACS).

Retailers, consumers and councillors, the three groups questioned by ACS, all stated that post offices had the most positive impact on their local area.
Other businesses getting the thumbs up in Community Barometer 2014 are independent convenience stores, banks, specialist food shops, restaurants and banks. Betting shops, takeaways and pawnbrokers were often seen as detrimental to neighbourhoods.
ACS boss, James Lowman, said: “These results clearly show that people want a diverse offering of financial services, retail outlets and places to eat and drink. The tendency of consumers to want more independent stores and specialists shows that they want to shop in places which have a unique local atmosphere and aren’t just part of a clone town full of national chains.”
Elected councillors emerge as strong supporters of c-stores, with half of them describing them as the businesses that have the most positive impact on the communities they serve. They are the least satisfied with the level of post office provision, with a third thinking that there should be more in their area. 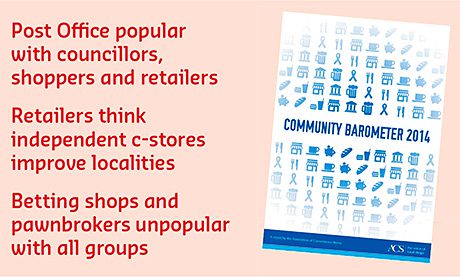 Councillors are also the most critical of the numbers of takeaways, pawnbrokers and charity shops. They are particularly down on betting shops, with more than three-quarters thinking their area would benefit from a reduction in numbers. No councillor wanted more betting shops in his or her area.
As well as supporting post offices, retailers think coffee shops, cafes, restaurants, pubs and bars have the most positive effect on any locality. They agree with councillors on the negative impact of pawnbrokers.
Consumers see things differently. After post offices, they think specialist food shops, pubs, bars and pharmacies enhance their neighbourhoods to the greatest extent.