Lucozade Ribena Suntory, Red Bull and Coca-Cola Enterprises are some of the giants of functional, energy, and sports drinks in the UK. How do they see the market? What are they doing with their brands? And what advice do they have for retailers?

AFTER four years in the doldrums, Lucozade Sport has returned to annual growth, putting on 6.6% according to Nielsen figures up to the end of June.

The company puts the turnaround down to “impactful and hard-hitting brand activity,” particularly the Lucozade Body Fuel campaign. “We are continuing to deliver the correct messaging to our customers and consumers on the benefits of Lucozade Sport,” said Georgina Thomas, category director at Lucozade Ribena Suntory Ltd. “It is an isotonic, carbohydrate-electrolyte drink for enhancing hydration and fuelling performance during prolonged endurance exercise.”
Scots consumers are said to be particularly keen on the Lucozade portfolio, especially its mainstream energy products. Here, Lucozade Energy is said to take 37% of value sales in energy drinks compared to 31% value share in England and Wales, according to Nielsen figures quoted by the company. Lucozade Energy has grown value sales by 3.2% year on year, and that’s said to have been fuelled by strong performances from new varieties Pink Lemonade and Caribbean Crush. 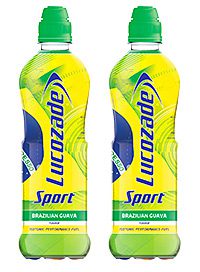 Thomas said: “Lucozade Energy 500ml & Lucozade Sport 500ml are the key SKUs for the impulse channel, tapping into the continued trends for convenience and on-the-go.
“According to our internal research, 49% of soft drinks purchases are unplanned and brand equity and consumer understanding of usage occasions is critical to getting soft drinks on shoppers’ agendas. Lucozade Energy Orange 500ml remains the favoured flavour profile with £27.2m value sales and growing by 3.2% in value versus a year ago according to Nielsen.”
She also argued that, as the biggest brand in sports and energy drinks, Lucozade deserves a prominent position in the chiller. “Shoppers continue to look for the reassurance and quality of a trusted and well-known brand,” she said. “Despite the recessionary conditions, consumers are still opting to purchase branded sports and energy drinks due to the strong link they have to value.
“For retailers, the important thing is to motivate shoppers towards purchasing the higher-value products, which will have a higher cash margin. Lower-priced products may have an attractive percentage margin, but are very unlikely to offer as much cash.
‘Retailers should ensure that the higher-value branded products are the ones that are most visible, with the greatest amount of chilled space,” she said.

• Energy-drink consumers are currently looking for healthier products, an exciting range of tastes and value for money, according to Red Bull.
“Red Bull always stays focused on the core plan and what the consumer wants,” Gavin Lissimore, Red Bull head of category marketing, told Scottish Grocer earlier this year.
“We listened to those consumers who said they would buy if we were slightly cheaper so we moved our RRP on the price-marked can from £1.35 to £1.19.
“We are planning on driving growth via zero-calories products, driving a strong growth performance within symbols and independents.”
To bring on board the 27% of non-users who described their barrier to buying energy drinks as “taste”, the company launched Red Bull Editions.
Lissimore said: “Editions has been a huge success bringing incremental shoppers to the energy category. It was worth £24m in 2013 alone.”
He suggested that retailers use the “stair step approach: stocking sizes next to each other will encourage consumers to increase their weight of purchase”.
He also advised c-store owners to make room in the chiller for four-packs during the summer months.
• Innovation – in flavours and varieties – is the key to ongoing success in energy drinks according to Coca-Cola Enterprises (CCE).
Dave Turner, trade communications manager, said: “Sub-segments are also likely to continue to be developed, such as Monster’s Rehab range, giving consumers new drinks choices from familiar, best-selling brands.”
He stressed that, while low-calorie energy drinks are currently only worth £72.6m according to Nielsen – compared to £538.3m for regular varieties – they are growing nearly three times faster. Low-calorie and sugar-free lines were up 19% last year.
“In response to the growing demand for low- or zero-calorie drinks, the beginning of 2014 saw Relentless Sugar Free relaunched as Origin Ultra,” said Turner. That followed consumer feedback requesting “a less prominent call-out of the product’s low-calorie proposition on the can”.
“Relentless Origin Ultra followed the relaunch of Monster Energy Absolute Zero last year, helping to provide choice for consumers looking for a low-calorie energy drink.”

CCE sees price-marking as very important for convenience outlets, with PMPs driving growth over the past year.
“Monster Energy and Relentless are both seen as premium brands,” Turner said. “The price-marked packs at £1.19 and 99p respectively each offer great perceived value to consumers, whilst helping to increase sales for retailers.”
CCE has been ramping up activity to boost its Powerade sports drink brand.
“At the back end of last year, we introduced a new Powerade 85p price-marked pack to help convenience retailers attract shoppers in the impulse channel back into the brand,” Turner said.
“This year, as part of Coca-Cola’s global partnership with FIFA, Powerade has taken centre stage as the official sports drink of the 2014 FIFA World Cup in Brazil, with significant brand visibility, on-field presence and association with the world’s best football players.
“Ahead of the tournament, we worked closely with our customers on specific overlays and promotions to leverage our global assets, including the opportunity to win a meet and greet in-store with Spain, Barcelona and global Powerade star Andres Iniesta.”