World Cup fever or not? Have the boys in Brazil put cash through the till? 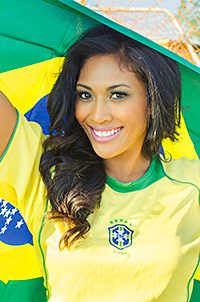 WITH bunting and flags festooning the shop, a display of footballs by the front door and a guess-the-score competition every day, Premier Mo’s in Blantyre is a little bit of Rio in central Scotland. And the World Cup has been a profitable tournament for owner Mo Razzaq.

“We want to hook into events like this, that customers really enjoy. If we can integrate into something positive then instead of the customer going to the next retailer he will come to me because he knows I’m as keen as he is.”
He planned his Brazil campaign months in advance. With all the games on free-to-view channels, he reckoned that it would be a family-oriented event. He stocked up on eight-packs of Irn-Bru and 15-packs of Coke on special offer earlier in the year. Those, plus sharing bags and multipacks of crisps, multipacks of Budweiser and two for £1 sweets, have been his star sellers of the tournament.
Plus, busy shoppers keen to get home to watch the game, buy their groceries as well.
Mo also altered the shift changeover, from 5pm to 4pm, so the shop would be fully staffed for folk rushing home from work. “It has worked brilliantly,” he said. “Everything I’ve put in place has worked out for us.”
At the award-winning Spar in South Street in Greenock, owner Billy Kay told Scottish Grocer he thought the World Cup had helped boost sales of drinks but it was difficult to say how great the effect had been because of other factors.
“We have seen an increase in beers but it’s not in large multipacks, more four-packs and some 10-packs. They’re sitting in the house watching the football but they’re not going crazy.
“We are getting a bit of a hit because of the World Cup but it’s hard to say how much because the weather has been really good as well.
“Milk slowed down drastically last week. I put that down to good weather, more cold drinks and fewer cups of tea.”