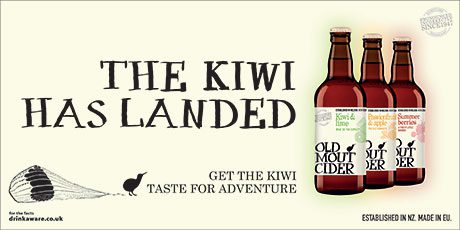 BEER and cider producer Heineken is urging cider drinkers to ‘Get the Kiwi taste for adventure’ in a £3 million launch campaign for Old Mout, the cider that originated in New Zealand where it is the top-selling packaged cider brand.
The campaign, launched last month, includes outdoor posters and print media ads. There’s also sampling activity and digital marketing work.
Old Mout features a 4% ABV range of three flavoured ciders, intended to appeal, says Heineken, to young adult drinkers with a playful sense of adventure and taste for discovery.