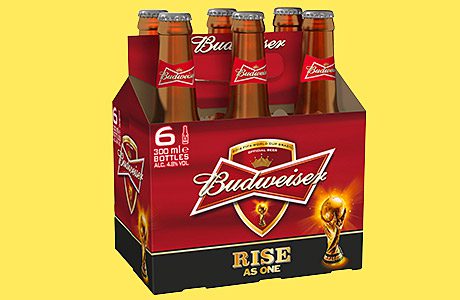 Called Rise As One the global beer brand says it’s designed to celebrate moments that unite football fans around the world.
The programme will feature television and out-of-home advertising, as well as in-store and social media activity.
Budweiser packaging for the tournament, features the FIFA World Cup Trophy. A limited-edition aluminium trophy bottle will be introduced simultaneously in more than 40 countries.
In the UK an on-pack consumer promotion will feature a competition to win a trip the 2014 FIFA World Cup in Brazil. Budweiser UK will also launch new 18-can and six-bottle packs.