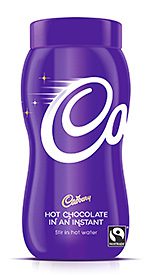 CADBURY became Fairtrade on a number of Cadbury Dairy Milk products in Britain in September 2009.