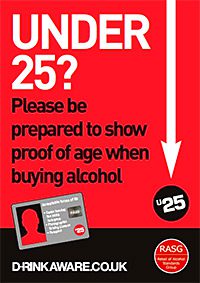 SCOTTISH retailers’ application of the Challenge 25 requirements of the licensing laws is working well … maybe even too well.

Chief constable of Police Scotland Sir Stephen House, in a report to the Scottish Borders Licensing Board, said the number of crimes of underage purchasing of alcohol has dropped since retailers have been required to demand photo ID documents that prove would-be alcohol purchasers who look under 25 are at least 18 years of age.
But it hadn’t stopped under-18s from drinking alcohol because adults buy it for them or give it to them.
“The introduction of Challenge 25 from 1 October 2011 has not seen any reduction in the consumption of alcohol by children and young persons,” he said.
“However there is a move towards ‘agent purchase’ of alcohol and much less instances of children or young persons purchasing alcohol themselves.”
While some media reports suggested that the chief constable’s remarks implied Challenge 25 was ineffective the representative body for Scotland’s c-store retailers took the opposite view.
John Lee, policy and public affairs manager at the Scottish Grocers’ Federation said: “We would say this has come about because our members have successfully implemented Challenge 25, they’ve made it work, but it has shifted the problem out of the store.
“The focus of policy and enforcement now has to go outwith the store and look at what is happening in the wider community and the home. The only way we can really start to do that is by working with police and stakeholders in health and social services to deal with this problem.”
But the situation is complicated by the rules on supply of alcohol to under-18s. It’s illegal for under-18s to buy alcohol and for an adult to act as an agent and buy alcohol for an under-18 year old. Recently police have also been acting against adults who supply (give) alcohol to youngsters in public places.
A police spokesperson told Scottish Grocer: “We welcome the fact that the vast majority of licence holders sell alcohol responsibly and have in place the Challenge 25 age verification policy.
“Since 1 April 2013, there have been 12 members of the public reported to the Procurator Fiscal for the offence of supplying alcohol to children and young persons in a public place.”
But the chief constable had also noted in his report that parents often gave their children alcohol to take to parties. That doesn’t appear to be covered by any current law.
Police had spoken on the issue at a number of school parents nights.
“We cannot stress highly enough the risks of children becoming intoxicated and the subsequent vulnerabilities that occur,” the spokesperson said.
“We would hope that parents understand the life-changing damage that can be caused.”