SG workSHOP projects are designed to run over several months and category management projects begin with a meeting with the retailer. In our first project Barry Cuthbertson sales and marketing development manager for Muller Wiseman Dairies visited Scott Graham owner of McLeish, the award-winning deli, c-store and food-to-go outlet in the established Aberdeenshire market town of Inverurie. 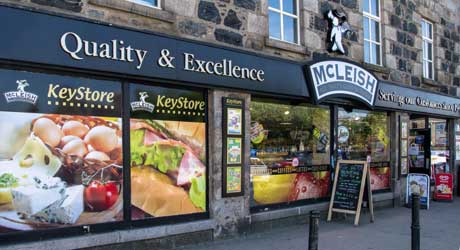 It’s a prosperous town centre which has attaracted many retailers. McLeish’s clientele includes local families, school children, workmen and tourists.
Scott is well known as a stockist of high-quality local produce.
As he began his evaluation Barry’s first observation was that much of what the store was doing with milk was absolutely right. The milk fridge was prominently positioned and clearly visible from the entrance. Freshness and availability were excellent and the range covered all the main types of milk.
But there were some things he thought could be done to make milk work better for the store.
Many of his suggestions ar shown on the photo diagram on the right.
Underlying a milk ranging and merchandising strategy should be a realisation that just about everyone buys milk but that only roughly one in five people buy milk in c-stores. So despite it being a staple product it does provide real sales opportunities, he said.
On top of standard take-home milk sales there are also opportunities to add sales by understanding the importance of shopper missions and seasonality.
So definite recommendations included offering a summer link-save deal featuring the excellent local berry fruits and cream as well as featuring milk and milk drinks in link-save meal deals and in food-to-go areas generally.
In SG workSHOP articles over the coming months we’ll look at Barry’s suggestions in detail. Find out exactly how Scott puts them into operation and hear about the outcomes.
[hr]
First project in Scottish Grocer’s initiative to help Scotland’s retailers get the best out of their businesses sees Muller Wiseman Dairies’ Barry Cuthbertson and colleagues evaluate and advise on milk ranging and display at McLeish in the centre of Inverurie.
What were Barry’s first suggestions?


• Child-friendly pack sizes in milk and flavoured milks such as Shock,which are popular with one of McLeish’s most important customer groups – pupils at the local school – are positioned too high in the milk fridge. Consider moving the products closer to eye and reach-level for the kids. Having all the flavoured milks together on two shelves might also improve standout and sales.

• A summer link-save deal combining cream and the wonderful local berry fruits that McLeish stocks would be a certain hit.

• McLeish has one facing of ‘the One’ low-fat milk. Consider moving it to the centre of the shelf to make it easier to find.

• A store of McLeish’s size, with a prominently –sited milk fridge, doesn’t need full dual-siting of milk. However, also featuring single-serve pack sizes of milk and milk drinks with the sandwiches in the separate food-to-go fridge and using them in meal deals could pay dividends.

• Consider a multi-deal on core milk units. Take-up isn’t always huge but it helps convey good value in the range.

• Refresh shelf edging and other POS material. Use milk reminders in other parts of the store.